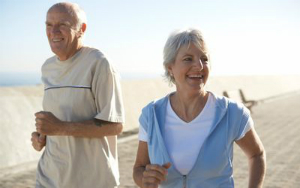 Exercise is the best option for good health in older age, says Dr Alba Gómez Cabello, lead author of a new study, who studies growth and exercise at the University of Zaragosa. But for those unable to perform aerobic exercise, this vibration technique “could be an easy and quick treatment to improve physical fitness”, he says.

The method involves standing on top of a flat platform about the size of a boogie board that sends mild vibrations through the feet to the rest of the body, while the person does exercises such as standing or squatting. Bending the knees helps transmit the vibrations, says Dr Cabello.

In the new Spanish government-funded study, 24 men and women older than 65 performed 10 squats held for 45 seconds on the vibrating platform, with a minute rest in between, three times per week for 11 weeks. The study also included 25 people who did not take part in the vibration exercises.

There were some differences between the groups by the end of the study, although they were small. Those who did the exercises were, on average, able to do two more reps of upper and lower body strength exercises, had almost half an inch more lower body flexibility, and walked 33 yards one second faster than before the vibration training, according to results published in the journal Maturitas.

“Whole body vibration is an easy and quick way of exercise that stimulates muscles and improves fitness,” says Dr Cabello.

In theory, vibrations help activate muscles, strengthen bones and improve circulation in people of all ages — similar to the idea behind vibration belts marketed as weight loss tools in the 60s.

The vibration platforms, which cost between $150 and $3,000, have shown mixed results in recent research, improving balance and muscle tone in some studies but failing to prevent bone loss in postmenopausal women in another.

There still is not enough evidence to convince most exercise scientists to advocate the devices, according to Dr Wojtek Chodzko-Zajko, who studies aging and physical activity at the University of Illinois at Urbana-Champaign.

“We don’t say a single thing about whole body vibration,” he says of a position paper on aging and physical fitness he authored for the American College of Sports Medicine in 2009. “That doesn’t mean it’s a scam. It means there’s really been very little study of this kind of intervention.”

The vibration group did squat reps, while the comparison group did not, so some of the fitness improvements could have been due to the squatting exercises, rather than the vibration.

“This showed an improvement in motor performance on simple tasks,” says Dr Chodzko-Zajko, who was not involved in the study. “That doesn’t necessarily correlate with quality of life.”

A better assessment of the true health of older adults would take into account whether whole body vibration influences chronic conditions such as heart disease, and mental health, depression and anxiety, he says.

Another recent study found the vibration platforms could be introduced to nursing homes and would benefit residents, at least for improved balance.

Dr Chodzko-Zajko’s 82-year-old mother has a whole body vibration machine in her bedroom, which she uses every morning to “loosen up her joints”.

He offers her the same advice he would offer anyone: “I don’t think it’s going to do you any harm, but don’t stop doing your regular exercise routine.”