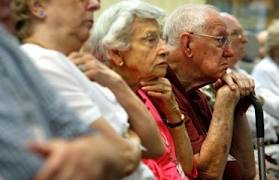 Older adults with hearing loss are more likely to develop problems thinking and remembering than older adults whose hearing is normal, according to a new study by hearing experts at Johns Hopkins.

In the study, volunteers with hearing loss, undergoing repeated cognition tests over six years, had cognitive abilities that declined some 30 percent to 40 percent faster than in those whose hearing was normal. Levels of declining brain function were directly related to the amount of hearing loss, the researchers say. On average, older adults with hearing loss developed a significant impairment in their cognitive abilities 3.2 years sooner than those with normal hearing.

The findings, to be reported in theJAMA Internal Medicine online Jan. 21, are among the first to emerge from a larger, ongoing study monitoring the health of older blacks and whites in Memphis, Tenn., and Pittsburgh, Pa. Known as the Health, Aging and Body Composition, or Health ABC study, the latest report on older adults involved a subset of 1,984 men and women between the ages of 75 and 84, and is believed to be the first to gauge the impact of hearing loss on higher brain functions over the long term. According to senior study investigator and Johns Hopkins otologist and epidemiologist Frank Lin, M.D., Ph.D., all study participants had normal brain function when the study began in 2001, and were initially tested for hearing loss, which hearing specialists define as recognizing only those sounds louder than 25 decibels.

"Our results show that hearing loss should not be considered an inconsequential part of aging, because it may come with some serious long-term consequences to healthy brain functioning," says Lin, an assistant professor at the Johns Hopkins University School of Medicine and the university's Bloomberg School of Public Health.

"Our findings emphasize just how important it is for physicians to discuss hearing with their patients and to be proactive in addressing any hearing declines over time," says Lin. He estimates that as many as 27 million Americans over age 50, including two-thirds of men and women aged 70 years and older, suffer from some form of hearing loss. More worrisome, he says, only 15 percent of those who need a hearing aid get one, leaving much of the problem and its consequences untreated.

Possible explanations for the cognitive slide, Lin says, include the ties between hearing loss and social isolation, with loneliness being well established in previous research as a risk factor for cognitive decline. Degraded hearing may also force the brain to devote too much of its energy to processing sound, and at the expense of energy spent on memory and thinking. He adds there may also be some common, underlying damage that leads to both hearing and cognitive problems.

Lin and his team already have plans under way to launch a much larger study to determine if use of hearing aids or other devices to treat hearing loss in older adults might forestall or delay cognitive decline.

In the latest study, which began in 1997, all participants were in good general physical health at the time. Hearing tests were given to volunteers in 2001, during which they individually listened to a range of soft and loud sounds, from 0 decibels to 100 decibels, in a soundproof room.

Brain functioning was also assessed in 2001, using two well-recognized tests of memory and thinking ability, known as the Modified Mini-Mental State (3MS) and Digit Symbol Substitution (DSS), respectively. Included in the 3MS test, study participants were asked to memorize words, given commands or instructional tasks to follow, and asked basic questions as to the correct year, date and time. In the DSS test, study participants were asked to match specific numbers to symbols and timed on how long it took them to complete the task. Both types of tests were repeated for each study participant three more times until the study ended in 2007, to gauge cognitive decline. Factors already known to contribute to loss of brain function were accounted for in the researchers' analysis, including age, high blood pressure, diabetes and stroke.

Funding support for this study and the Health ABC study was provided by the Intramural Research Program of the National Institute on Aging, part of the National Institutes of Health (NIH). Corresponding grant numbers are N01-AG62101, N01-AG62103, N01-AG62106, R01-AG028050, R01-NR012459, P30-AG02133 and K34-DC0111279. Additional research support was provided by the Eleanor Schwartz Charitable Foundation and a Triological Society and American College of Surgeons Clinician-Scientist Award.