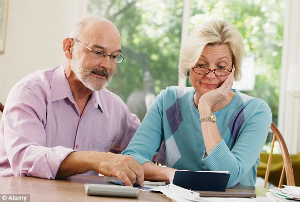 A rise in the number of families having to care for ageing parents as well as adult children is set to spell the end of comfortable middle age, scientists say.

A report predicts increasing ‘resentment’ among those in their 40s and 50s that they are having to take on increased responsibilities while working longer before drawing their pension.

These ‘burdens’ mean fewer will be able to use their pre-retirement years to pay off their mortgage, go on trips and fulfil lifetime ambitions.

The government-commissioned study reveals the number of people having to look after their aged parents is set to rise by up to a quarter over the next decade – approaching 500,000 by 2022.

At the same time, the trend of children aged 20 to 35 increasingly staying in the parental home, because they cannot afford a house of their own, is expected to continue. As well as providing their adult children with a home, many middle-aged parents are also having to financially support them.

Since 1997, the number of young adults living with their parents has risen by 20 per cent to 3.5million.

The demographic shake-up is outlined in a report by the Foresight group of scientists led by the government’s Chief Scientific Adviser, Professor Sir John Beddington.

It warned: ‘The growth in the so-called “sandwich” generation, who have responsibilities for both childrearing and elderly care, has implications for social policy as this group may demand greater recognition and, potentially, assistance, financial or otherwise.’

The study, Future Identities, points to the end of traditional age identities as younger pensioners become healthier and younger adults find it harder to buy their own home.

They say there will be a new category between adolescence and ‘full adulthood’ called ‘emerging adulthood’.

The UK will have to get used to a population which is getting gradually older, the scientists say.

They point to one study which said it was possible that half of all children born since 2000 will live to the age of 100.

This will coincide with the entry of ‘baby boomers’ into late middle and old age, so the proportion of older people will be greater.

‘For many people aged 65 and over, wellbeing is seen as being able to continue to do the things they have always been able to do. For the affluent middle-classes, a comfortable and leisured early old-age can be enjoyed while health lasts.

‘However, this will not be the case for all, as many people will lack the financial resources needed to achieve this level of comfort and security.’