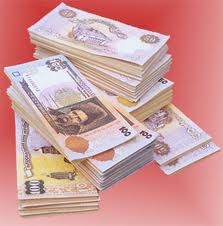 The first coins of Rus (zlatnyk and sribnyk) were minted at the end of the 10th - the beginning of the 11th century during the reign of princes Vladimir Sviatoslavovych (978- 1015), Svjatopolk Okajanyj (1018), Yaroslav the Wise (1019-1054 pp. ).  The Byzantine coins became a model for the coinage.

The main reason to start minting zlatnyks and sribnyks was purely propagandistic and political: first of all to proclaim the sovereignty of ancient Rus to the whole world. These coins were commonly used both in the territory of Kievan state and far beyond its borders, thus, the goal of exaltation of the prince and his state can be considered as achieved.

The history of  money in the independent Ukraine starts in 1991 with detachable coupons.  After the collapse of the UdSSR, Ukraine was left with Ruble, currency unit of the already non-existing state, emission of which moved to the Russian Federation.   Since September 1991, Central Bank of Russia ceased supplying cash to Ukraine  and the young independent state, apart from a string of other economic issues, faced a problem of the absence of the own currency. In January 1992, a temporary  monetary unit was mobilized parallel to the Ruble (initially planned for only 4-6 months) called the reusable koupon-ruble , which displaced the Ruble and was in circulation until the Hryvnia was introduced in September 1996.

Due to hyperinflation, which meant a rapid devaluation of money, as prices would  rise several times a day, there was a need to replace the existing  temporary monetary unit with a permanent one.  The National Bank prepared and conducted a monetary reform and on September 2, 1996 the Hryvnia was mobilized.  According to the Decree of the President of Ukraine "On the monetary reform", the monetary reform was being carried out from 2 to 16 September, 1996. To start the reform the Hryvnia was mobilized , which was exchanged at a ratio of 1 Hryvnia to 100,000 Coupon-rubles.

The term "hryvnia" was associated with a neck hoop, a female decoration (hryvna), made of precious metal.  Later it took on new meaning , which became equivalent to a certain amount of silver (weight), thus a Silver hryvnia appeared.  There were three most commonly used types of the Hryvnia in terms of a currency unit:  Hryvnia of Kyiv, of Chernihiv, of Novgorod; there was also a Lithuanian and Tartaric hryvnia.

The introduction of Hryvnia on September 2, 1996.

In 1992 the first samples of the Hryvnia were manufactured in Canada by Canadian Bank Note Company (105 containers of bank notes in denomination of 20 Hryvnias) and by De La Rue plc based in Malta (in denomination of 50, 100 and 200 Hryvnias) after the sketches of V. Lopata and with the assistance of B. Maximov.

In 1994, the first line for banknote  printing was put into operation at the Mint of the National Bank of Ukraine. The mint was opened in 1994, and is situated in   Kyiv. At the same time, the National Bank of Ukraine received its own industrial base for minting  coins designed for mass circulation, and also memorable and anniversary coins and other products for rewarding.

The first Ukrainian coins were made in 1992 at the Lugansk plant for the  ammunition production and the Mint of Italy. There were also some doubts about which name should be given to the coins :  among the suggested names there were: “sotyj”, “rizana”, “spysivka”, but  on 2 March 1992, the Supreme Council of Verhovna Rada approved the name "kopijka".

The positive consequences of monetary reform will favour the development of economy and market transformation in economic mechanism of independent Ukraine for a long time.

What forms of money  are in circulation nowadays?

• Change coins in denomination of 1 Hryvnia.

Protective thread - a vertical dark strip, normally 0,8 mm wide within the tissue of paper, visible against the light, which has an inscription saying "Ukraine" and can be read with a magnifying glass (50, 100 UAH).

Combined drawing is depicted in the same place on both sides of a banknote, which elements should coincide when examined against the light (50, 100 UAH).

Sign for the blind is a bold element found in the lower left corner of the bill, which can be felt under fingertips and determines the denomination  of banknotes (50, 100, 200, 500 UAH).

Solvency of banknotes and coins is their ability to be a legitimate means of payment for goods and services. Here we are talking about a situation when you deal with counterfeit banknotes.  The verification  of banknotes is carried out by banks and charges are practically equal everywhere and constitute 50 kopijkas per banknote. For significant amounts of banknotes banks normally offer discounts.  If by exchanging any currency at a bank you were reported that, for example, a one hundred dollar bill is counterfeit (not valid) still you are convinced of the opposite you may send the banknote through your bank to the National Bank in order to obtain a written opinion proving falseness (for this purpose you will make a treaty with the bank, also a separate agreement plus an acceptance and handing-over certificate of the questionable banknote).

The basic rules for using money:

• According to Article 99 of the Constitution of Ukraine, the Hryvnia is the only legal tender in Ukraine, which must be accepted by all legal and physical persons without any restrictions in the territory of Ukraine;

• Do not pay for goods and services with foreign currency (punished by the current legislation of Ukraine);

• Money is  not an object, but only a means for achieving an object;

• Count money on the spot (an NBU instruction);

• Do not perform any operations with money without obtaining a sustaining document (check, receipt etc. );

• Do not keep money at home;

• Keep record of your finances;

• Do not spend more than you earn;

• Set aside a part of money you earn.