(MoneyWatch) Is it reasonable to plan your retirement by assuming that you'll spend less money as you age? Welcome back to the second part of my look at this important retirement planning issue.

Some financial analysts justify reliance on reduced spending by reviewing average annual expenditures by various age groups, as published in the Consumer Expenditure Survey (CES) by the Bureau of Labor Statistics. Should you rely on this data on average annual expenditures? You can gain some useful insights, but using averages can be misleading. After all, you wouldn't buy clothing that fits the average person -- you want clothing that fits your height, weight and waist.

Similarly, you'll want to plan your retirement by looking at your particular circumstances. For example, will you pay off your mortgage by retirement? Will you need to support dependent children or parents? Are you in good or poor health? Do you want to travel a lot, or do you have expensive hobbies? Can you use public transportation and get rid of a car? All of these factors should be taken into account when planning your retirement, not the average retirement.

It's highly possible that the CES data could reflect generational differences in spending habits. It remains to be seen if boomers will continue their current spending habits into their later years, and will spend more than the current generation of retirees.

One possible reason why the CES data shows that older people spend less than younger people is that older people have less income to spend. If this is the case, the reduced spending might not be voluntary. For instance, this graph from the 2011 CES data shows annual income after taxes by age brackets, and the pattern of reduction in expenditures shown in my prior post follows the pattern of reduced income after taxes. 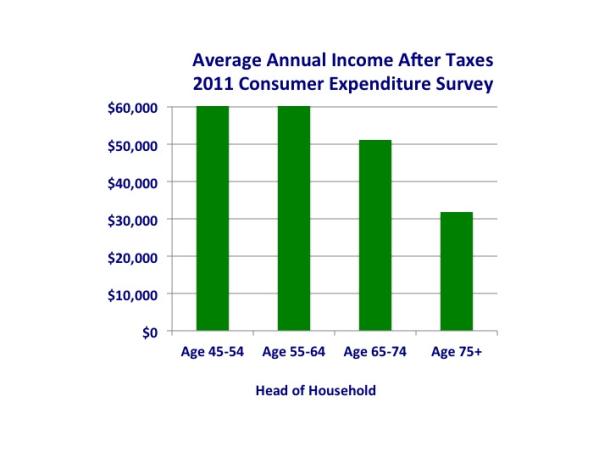 The reduction in income by age makes sense for a number of reasons. Based on the typical rise in incomes over a career, people currently in their 60s will have higher incomes from Social Security, pensions and work, compared to people currently in their 70s and beyond. And the older you get, the more likely it is that a fixed pension or annuity will buy fewer goods and services due to inflation, or worse yet, that you'll have exhausted your retirement savings.

Some analysts predict a U-shaped pattern of expenses as you age: You'll spend money on travel and recreation in your 60s and early 70s, you'll reduce these discretionary expenses in your late 70s and early 80s, and then you'll spend much more money on medical and long-term care expenses in your mid-80s and beyond. Indeed, one data point -- my 91-year-old mother -- confirms this pattern. She and my father traveled extensively in their 60s and 70s, then their spending tapered off in their 80s as they were less physically able to travel. But now she's spending a lot of money on long-term care, compared to just a few years ago.

For an excellent analysis of the potential for a U-shaped pattern of expenses, see Dr. Wade Pfau's recent article, "How Do Spending Needs Evolve During Retirement?" Pfau digs down farther into the CES data to offer some interesting insights. For example, retirees with discretionary income may indeed reduce their spending as they age, but elderly people close to the poverty level may not be in a position to voluntarily reduce their spending. Pfau also explores how spending on medical care increases with age, and he describes one strategy for addressing increased costs for medical care.

Many people have trouble delaying gratification, and they look for any reason to justify spending more today. There's a good chance that the issue discussed in this series of posts is just another example of this phenomenon. For instance, whenever I write about the advantages of postponing the start of your Social Security benefits or delaying drawing down your retirement savings, I get comments from readers who extol the advantages of spending for today. They often say, "After all, you never know how long you'll live," and then cite stories of some friend or relative who died a year or two after retirement.

Yes, I agree that you never know how long you'll live. It might be a very long time! In fact, I hope that you'll take care of yourself and have a long, healthy life, and if I were you I'd plan on it. Stay tuned for my third post on this topic, where I'll show how you could consider your future spending patterns when you're developing your sources of retirement income.