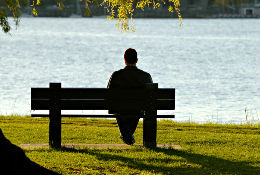 Not having many friends, or people you can talk to or rely on, has already been linked to depression for obvious reasons, but now new research indicates that it even has an effect on your body's inflammatory response to illness.

Researchers from the Institute for Behavioural Medicine Research at Ohio State University looked at data based on a series of studies on a group of breast cancer survivors and another of healthy, overweight middle-aged adults. They assessed loneliness in the study participants, based on a questionnaire given to them, and correlated this data with levels of inflammatory proteins in the participants’ bloodstreams after they had experienced stress.

They induced stress by asking the participants to deliver an impromptu five-minute speech and then do a task in front of a video camera and a panel. After that, the participants’ immune systems were then stimulated using a chemical. The results showed that those who were lonelier produced significantly more inflammatory cytokines.

Finding new friends when you were at school, university or at a new job was probably easy, but as you get older opportunities for forging new friendships becomes more difficult, mainly because there’s less opportunity to meet new people and engage socially with them.

Don’t be ageist. Don’t avoid getting to know people who are younger or older than you just because of their age. If your younger neighbours invite you over for a party or a barbecue, go - even if you know you’re not in the same age bracket as most of the guests. Most often it’s not others’ attitudes to age that prevents you making friends with people from different age groups, it’s your own negative expectations.

Use your phone. Keep in touch with people via regular emails but be sure to pick up the phone too. It’s far easier for people to forget an email you’ve sent than if you call instead. So arrange to see people by phone and have conversations that way too.

Use email too. For friends or family who’ve moved further away, Skype and Facetime, among others, are a great way to keep in touch. Video chat regularly so you get used to the process and it becomes a happy habit.

Join in local events. Getting to know people who live nearby is ideal as you’ll have more opportunities to see them regularly. Check your local library, town hall or gym for classes or social events that you can sign up for.