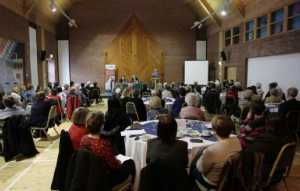 THE lonely plight of many elderly Ulster residents was put under the spotlight on Thursday.

A gathering of around 80 people, including social workers, volunteers and members of housing associations, heard that loneliness can help to increase instances of dementia, stress and even raise blood pressure.

Among those speaking at the conference was the Rt Rev Dr Christopher Herbert, former Bishop of St Albans, in England.

Now aged 69, he spoke of experiencing the onset of age himself, telling the conference: “When people now stand up on the Tube to let me sit down, I can’t quite believe they are standing up for me.”

Quoting extensively from poetry throughout, especially that of Elizabeth Jennings, several times he repeated the line: “Each year the pouches fill, the skin is uglier,” adding: “I’m inclined to say: tell me about it!”

As a former vicar, Dr Herbert told the audience that everyone’s social network tends to get smaller as they get older, and that parishioners would often say to him: “All my friends are gone now. I’ve outlived my friends. I do miss them terribly.”

Everyone has a “human need to be listened to”, he said, and without it a “deep loneliness” can set in.

Just before he gave his address, called Mind, Body and Soul, Not Just Bricks and Mortar, one of the organisers had offered up a sample of studies claiming to show that living alone could be provably bad for residents’ health (see below).

Some of the delegates to the conference know well about the perils of living in isolation.

Meryl Townsend, 83, living in east Belfast, said one of her former neighbours had fallen down the stairs and lain, apparently unnoticed, for an entire night.

Being a “stoical person”, she had not wished to have an ambulance called.

Today she lives in a nursing home, and Miss Townsend (who lives in private accommodation) regularly goes to visit her.

Miss Townsend, a former regional chairwoman of charity-cum-housing association Abbeyfield, said: “Here’s what can happen if you live alone and have no support or family.

“Any organisation that has a history of retired members should try to keep in touch. You haven’t got to be there all the time.”

She did suggest that if you have not seen a neighbour leave the house in a while perhaps it is time to pay a visit.

South Belfast woman Millicent Welch, a former catering officer at City Hospital and now in her 70s, volunteers with Abbeyfield to visit its residents.

She said sometimes individuals are just better off moving into a residential home rather than being “pressured” to stay in their usual house.

As the close-knit family networks which have long dominated Northern Ireland gradually break up, she said the problem will probably worsen.

“I think it’s good they’re addressing this matter of loneliness,” she said. “It’s only going to get bigger and bigger.”

It was not all gloomy, however.

Sounding an optimistic note, Dr Herbert (himself a former patron of Abbeyfield) at one point told delegates that having “decluttered ourselves”, retirees have a chance to contemplate things of “real, lasting importance”.