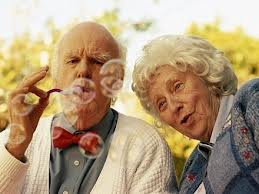 Want to improve your memory and mental sharpness? Turn that frown upside down. That’s the latest word from Ohio State University researchers who found simply being in a good mood helps boost brain power in seniors — improving their working memory and decision making.

The study, published in the journal Cognition and Emotion, is the first to show that the power of a positive attitude and outlook can blunt age-related declines in the cognitive abilities and mental functions of older Americans.

For the study, OSU researchers — working with collaborators from the University of Michigan, Linköping University in Sweden, and Cornell University — tracked the impact of mood on the mental abilities of 46 adults, aged 63 to 85 years. The researchers gave half of the study participants a thank-you card and bags of candy, tied with a red ribbon, to put them in a good mood when they arrived at the lab for the experiment. The other participants received no gifts and were deemed “mood neutral.”

All the study participants then completed computer tests of their working memory, decision making, and other mental skills — during which only the “good mood” group continued to receive positive messages from the researchers.

The results showed the older adults who were put into a good mood made “significantly better” choices and scored better on memory tests than those in the “neutral mood” group.

"Working memory is important in decision making," Peters said, noting the connection between the two mental skills. "If you're working your way through different options, how much you can remember of each option — and can therefore compare and contrast in your head — has a big impact on how well you can make a decision."

Although having a positive mood did not have an impact on some cognitive measures, such as speed of processing or vocabulary, Peters said the results are some good news overall for the nation’s growing population of seniors.

"Given the current concern about cognitive declines in the aged, our findings are important for showing how simple methods to improve mood can help improve cognitive functioning and decision performance in older adults, just like they do in younger people," she said.