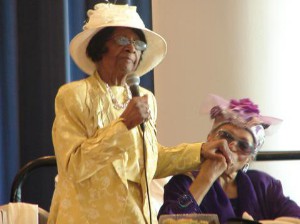 Her long life had another unique distinction. Before her death on Friday, the Detroit woman was one of the oldest people in the world.

"She said she didn't have a secret" to longevity, said Hines' granddaughter Darlene House of Detroit. "(She believed) that she was living in God's hands, in God's time."

Robert Young, senior database administrator for the California-based Gerontology Research Group and a consultant for Guinness World Records, said census records from 1900 say Hines was born in April 1899, which would put her at 113. He said the birth certificate the family has is a delayed birth certificate that was issued in the 1940s when Hines was an adult.

Either way, Hines set records. Young said factoring her age at 113, Hines was the world's sixth oldest living person, the second oldest living American and oldest living African American, according to the Gerontology Research Group. She has been the oldest person in Michigan since March 7, 2010.

Young said Hines was just shy of making it into the 2014 edition of the Guinness Book of World Records as one of the world's top 10 oldest living people. The book's edition has a springtime deadline.

Young said the Hines' successor for the title of oldest living African American is believed to be a woman named Jeralean Talley, who is 113 and also lives in Michigan. He said the world's oldest person is Jiroemon Kimura, 115, of Japan.

House said her grandmother had a positive outlook on life and always stressed to her children and other people the importance of education. She loved poetry and art, often creating works of art from discarded items she would find, such as an old wooden fence post or cardboard box.

"She had a very warm personality," House said. "She is somebody who reached out and touched the lives of a lot of people."

One of seven children, Hines was born Louisiana Summerlin in Luverne, Ala., and grew up on a farm. She was named by her grandmother after a place she'd never visited. Her grandfather had been a slave.

She married Arthur Hines in 1918 and, when their daughter and two sons were older, moved with him from Alabama to Florida, where she helped run a restaurant called the Blue Bonnet. The promise of a job for Arthur with Packard Motor Car brought them to Detroit in 1940.

House said that during World War II, Hines worked in an airplane factory as a riveter.

Later, Hines took classes at a beauty school and opened L. Hines' Beauty Shop on Leland near Chene in Detroit. The shop closed long ago, but Hines was still a licensed beautician at the time of her death, according to her granddaughter.

Even when she passed the century mark, Hines was largely independent. After breaking her hip in 2009, she needed the help of physical therapists and other home health care workers.

When House went to her grandmother's Detroit house early Friday, she found her dead in her bed.

Hines is survived by a daughter, Allean Hines House; 12 grandchildren, and many great-grandchildren, nieces, nephews and cousins.

There will be a family hour at 11 a.m. Saturday before a noon funeral service at Hartford Memorial Baptist Church.