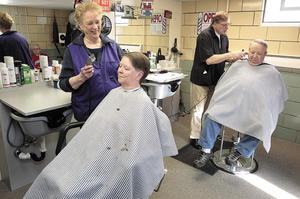 Retirement isn’t for everyone. Today’s senior citizens are living longer, healthier lives, and that allows them to embark on adventures, explore new careers and discover new talents. On Mondays, through a series of stories, we’ll introduce you to some of those extraordinary seniors who aren’t yet ready for retirement. In the process, we’ll explore some of the issues they face as they continue working.

You can’t call it work when you are having fun. That’s the premise that Ralph and Connie Miller have lived by for the past 30 years or so as barber and beautician.

Ralph has been a barber since 1971. His wife, Connie, 69, went to school in 1979 to become a beautician. The two met a little before that at The Hoover Co., where Connie worked for five years and Ralph for 36.

“I wanted something to fall back on, so that’s the reason I went to barber school,” Ralph said. “I had just came out of the service (in Vietnam). I couldn’t work full-time and go to college, it was just too much, so I dropped out of college. To supplement my income, I decided to go to barber school.”

After working at Hoover for five years, Connie and Ralph decided she would stay home to take care of the children. Not much after that, she too went to school to become a beautician.

It was to supplement their income that they later opened a barber shop in downtown Massillon and worked there for a while. In the 1990s, they moved the shop to the back of their home in Tuscarawas Township, where they remain at Country Cuts. The couple offers haircuts by appointment only, starting at $7.

Ralph officially retired from Hoover in 2001. But the pension and Social Security he receives, are not enough for the Millers, who still take care of their family.

“The younger generation thinks the older people have all the money,” Connie said. “Well, we don’t. We are still helping our family, we have to help them. And we’ve invested money and lost money, so where do you go from there?”

The price of living has gone up for everybody, and like every family, Connie and Ralph also have their own problems, like Connie’s cancer in the past, and the current cost of medication and health care.

Although the couple has lots of fun working together in their hair salon, they don’t really have a choice. They have to keep on working.

“There are so many people that need to supplement their income,” Ralph said. “Thank God we are healthy.”

And nobody will leave the chair unsatisfied or with a so-so cut.

“We take our time,” Connie said. “If someone wants to come in and get in and out, that’s not the place to come because we usually take more than half an hour for haircuts.”

The Millers also work whenever they have to.

“We don’t stipulate days that we work because we can’t miss a customer,” Connie said. “We try to cater to our customers when they come in. If they call and we have a doctor’s appointment, we will work together, so they can still come in.”

It is that convenience and the extra perks customers get at Country Cuts that keep them coming. While Ralph’s high energy levels allows him to keep customers laughing, Connie every so often wants to make sure their closest customers are well-fed.

“We give them a haircut and we feed them,” Connie said with a smile. “If we have a customer we know, we may even fix him a sandwich.”

Sandwiches and snacks are, however, for those customers who with time have become more than just customers.

“I don’t always do it,” Connie said. “But you get to know them and it’s more like family, that type of thing.”

And it is working around their own busy lives and customers’ schedules, having fun and keeping active that Connie and Ralph will continue working as long as they can.