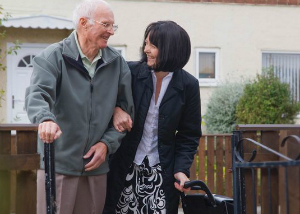 The Okinawans, the longest living race on the planet, who live off the south coast of Japan, practise social networking.

Good Samaritans live longer. Well, of course they do.

We’ve known for a long time that living in village communities where everyone mucks in promotes longer life.

The Okinawans, the longest living race on the planet, who live off the south coast of Japan, practise social networking and being good neighbours to contribute to the common good.

They’ve shown this approach pays off with added years of life.

Samaritans, the optimists of life, have a lot going for them. If we were to choose one factor above all others to increase longevity it would be optimism.

Optimism can give you real resilience as you get older and it’s a great healer. Research has shown that people with optimistic attitudes have fewer illnesses and recover more quickly.

Optimists are more likely to feel that they can take charge of their health and not just passively slide into old age.

They tend to take better care of themselves too. They sleep better, don’t drink or smoke too much, exercise regularly and are freer from depression.

They live longer and age more gently. It’s worth cultivating optimism, believe me. Now a new study has shown precisely why positive thinking and extending that philosophy to helping others, acting like a good Samaritan, actually affects our chances of living to a ripe old age.

The study from the universities of Buffalo, Stony Brook and Grand Valley State in the US points out that while we know social isolation and stress significantly impact on health, there’s no evidence that receiving help makes you healthier or live longer. It’s the giver that benefits, which is a puzzle.

For the study, nearly 850 people reported the amount of time in the past year they had spent helping friends, neighbours or relatives by providing transport, running errands, doing shopping or housework, looking after children and other tasks.

Over the five years of the study, scientists found that, when dealing with stressful situations, those who had helped others during the previous year were less likely to die than those who hadn’t helped.

Professor Poulin, of Buffalo University, said: “This study offers a significant contribution to our understanding of how giving assistance to others may offer health benefits to the giver by buffering the negative effects of stress.”

In other words, helping others lowers your chances of dying by softening the impact of stress in your life and making you more able to ride the punches.

In a way, being a giver stiffens your backbone and gives you resolve. You handle stress with more resilience. The payoff is a longer life.