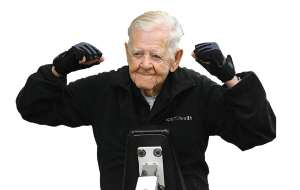 It wasn't the toll from lugging a heavy tool box to work that finally sent Ray Clark to the gym. It was something more profound. He lost his wife of 67 years. Then he lost his daughter. He was looking for something to fill the empty hours.

"I was getting a little lazy at home, and I decided I'd go down to the exercise club," he recalled. That was more than three years ago, when Clark was 98. As he turned 102 last week, Clark was able to curl 40 pounds, work out vigorously on a rowing machine and deftly pluck bouncing eight-pound kettle bells from the air with the hand-eye coordination of a much younger man.

"He's a tenacious son of a gun," said Thom Hunter, Clark's 70-year-old personal trainer at the Sport&Health club in Gaithersburg, Maryland, US. "They built them tougher in those days. He doesn't say he can' do it until he tries and sees he can'."

In a single 151-pound package, Clark embodies some of the greatest hopes and concerns that public health experts have for the fitness and health of the "older old," the growing population of people over 85. Clark has significantly improved his strength, balance, endurance and range of motion over the past three years, staving off frailty, possibly saving untold medical costs and proving that gains can be made at any age.

According to the National Institute on Ageing, only 11 per cent of people 85 and older engage in any regular exercise, despite clear evidence that the vast majority could work out safely, particularly if shown how. Fewer than 15 per cent of people 65 and older do any regular strength training, at a time in life when sarcopenia — the natural decline in muscle mass and strength — contributes to some of the most troubling, and preventable, conditions of old age.

"If I had to do only one thing for the frail older person, it would clearly be weightlifting exercises, and not any other form of exercise," said Maria Fiatarone Singh, a professor at the University of Sydney School of Medicine, who has been studying the value of strength exercises for the elderly for the past quarter of a century.

In 1988, Singh and her colleagues put older people who were in nursing homes on an "intense" (for them) resistance program and soon doubled and tripled their strength. In 2003, another of her studies showed that a year of weightlifting after a hip fracture — one of the most debilitating injuries of the very old — reduced nursing home admissions and mortality by more than 80 percent compared with other therapies. In 2012, a program of balance exercises and strength training significantly reduced falls among older people, according to another of her studies.

Singh said she believes that more than 80 per cent of people 85 and older could safely work out, and Tom Prohaska, dean of the College of Health and Human Services at George Mason University, said studies show that 95 percent of all older people can safely exercise, including those with arthritis, hypertension and heart disease.

Many people don' realise that problems they associate with old age actually are caused by poor fitness, experts say, and many others simply don' know how to get started. "If you're 85, where do you turn to exercise?" asked Scott Trappe, director of the human performance laboratory at Ball State University. "Most people don' know how to exercise, and if you're 85, where do you go?"

Singh lays more blame on the medical community, which, she said, hasn't sufficiently incorporated regular exercise into its treatment of older people.

To watch Clark move around the gym during his weekly half-hour workout is to understand what is possible for the oldest members of society, as well as the adaptations that must be made for them.

He warms up for 3 minutes 30 seconds on a rowing machine, not a treadmill, because it works both his upper and lower body. He does 10 reps with 60 pounds on the "pullover" machine, catches and hoists the bouncing kettle bells, then moves 60 pounds 10 times on the "seated row" apparatus.

"We have no mercy," Hunter said.

But he does, of course. As Clark walks the floor of the large health club, he places one hand lightly on Hunter's shoulder for balance. Hunter is more careful with Clark's hydration than he might be with a younger client. He repeatedly offers Clark water during breaks between exercises.

After three years, Hunter is no longer trying to build Clark's strength or improve his balance, though the pair is still working on Clark's flexibility. Now the task is mostly preserving Clark's abilities, to help ease and slow the inevitable physical decline that comes with age.

"What we're looking to do is maintain the muscle mass he does have, maintain or increase his range of motion and to maintain his balance," Hunter said.

Ray Clark was overwhelmed at first, but soon became inspired. He is on his third pacemaker, is losing his eyesight to macular degeneration and has difficulty hearing. But working out is something he can do.

"It gives him a lot of confidence," Dennis Clark said of his father's exercise routine. "That confidence that he has, you can' replace that."

It also wears him out. After a recent Friday workout, Clark had only one plan.