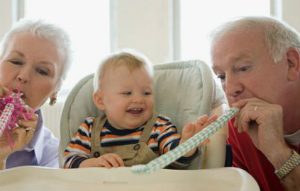 The risk to grandchildren from older fathers of sons is also higher than for younger dads, warn psychiatrists.

Mounting research suggests the older age of parents might be partly responsible for growing numbers of children with autism, but for the first time the risk of autism in the grandchild has been linked to the age of the grandfather at the time of his child's birth.

The data was compared with that from 31,000 unaffected members of the population.

The study found that autism risk in a grandchild increased the older the grandfather was when his son or daughter was born.

Having a son at 50 or older increased a man's chance of having an autistic grandchild 1.67 times.

The findings were published in the journal JAMA Psychiatry.

In the UK, around one in 100 adults is thought to be affected by autism, mostly men, although the true rate is far higher according to some researchers.

Autism is an umbrella term for a range of developmental disorders that have a lifelong effect on someone's ability to interact socially and communicate.

Lead researcher Emma Frans, from the Karolinska Institute in Stockholm, said: 'We know from previous studies that older paternal age is a risk factor for autism

'This study goes beyond that and suggests that older grandpaternal age is also a risk factor for autism, suggesting that risk factors for autism can build up through generations.'

Experts think the link with paternal age could be explained by genetic errors creeping into sperm production as men get older.

A combination of mounting mutations and interactions with other risk factors including persistent environmental chemicals in the body could finally cause the disorder to emerge.