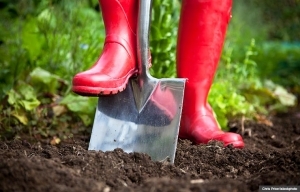 or gardeners, nothing gets our sap flowing for the upcoming like attending a flower and garden show this time of year. And if you're familiar with such shows, you know that few rival the annual Philadelphia Flower Show, which occurs in March and is billed as "the

My wife and I have attended the Philly show almost every year for the past two decades. I remember the first year, we came home all energized and ready to start gardening right away, only to find a couple of inches of snow still on the ground. "Too early," or so we thought. But in the years since, we've discovered that there are all kinds of things you can do to get a jump on the gardening season long before the last frost, and thereby save both time and money.

Start some flowers and other garden plants from seeds weeks before it's warm enough to transplant them outside. Plants started from seed generally cost only a fraction of what you'll pay at a nursery for those little plastic containers of seedlings once the gardening season is under way. 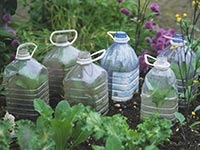 Determining when to start plants indoors depends on when the last frost typically occurs where you live, and then counting backward based on the type of plants you want to grow. Seed packets of those plants that are commonly started indoors usually contain special instructions for when and how to do it. In many parts of the country, March is the month to start seedlings indoors.

You can repurpose many would-be throwaway items — including cardboard boxes, toilet paper tubes, newspaper, egg cartons and even half-eggshells — to serve as miniature, biodegradable seedling pots. Some of the most common plants started from seeds indoors include tomatoes, peppers, melons, squash, eggplant and a wide variety of flowers and herbs. If you're short on sunny window space (the other necessity for starting most plants indoors) consider building a simple cold frame in your yard as a place to start seeds up to six weeks before planting season. You can find designs online of how to build cold frames out of inexpensive materials like bales of hay, scrap lumber, plastic sheeting and old windows.

My wife's birthday is March 11, and I kid her that I can always remember the date because that's the day I take our lawn mower to the repair shop to get it tuned up for the mowing season ahead. In our area, March 11 is at least a couple of weeks ahead of when most people take their mowers and other garden equipment to the repair shop, creating a monthlong backlog. So, not only is my mower ready for action before everyone else's, but I also get a 20 percent "early bird" discount on the tune-up.

3. Declare an early war on weeds

When the first signs of new growth and plants coming back to life start to emerge in the spring, you can bet a wide variety of weeds will be among them. As soon as the soil is no longer frozen — usually weeks before the last frost — start cultivating the surface soil in areas prone to weed growth to make it harder for them to take root, and then mulch over those areas immediately to keep weeds at bay. Also, pull hard-to-kill weeds and plants like dandelions, dock weed and even poison ivy (wearing protective gloves, of course). Weeds are only going to get bigger, stronger and harder to eradicate as the growing season continues, so literally nipping them in the bud will save you time and expensive herbicides in the months ahead. Stock up on rock salt, which is often marked way down at home centers when the last threat of icy weather has passed, and sprinkle it on gravel driveways and paths in the spring to keep weeds from taking over.

If you never got around to raking up all of the leaves and other yard debris last fall, that may be OK. In some situations, leaves can serve as a protective mulch that can help some plants survive the harsh winter weather. But as new plant growth begins, matted leaves from last year can inhibit plant growth and promote pest problems and some plant diseases. Consider composting last year's leaves and yard debris — they're already well on their way to decomposing — or shred them to use as mulch. If you have a mulching lawn mower, simply mow over any leaves still on the lawn so that the nutrients can return to the soil.

5. Tend to your perennials

Many perennials — plants that continue living for multiple years, including most trees and shrubs — can benefit from some attention this time of year. Since perennials can add significant value to your home, consider the TLC you give them as an investment in your future. Late winter and early spring are good times to prune many types of trees and shrubs in most regions. Generally speaking, ornamental grasses should be cut back before new growth appears in the spring, and fruit trees should be pruned and thinned before new growth develops. You can even divide some types of perennials, like Siberian iris, yarrow, asters and many hostas, in the early spring, making a whole new wheelbarrow full of plants for free! Now that's music to a cheapskate gardener's ears.