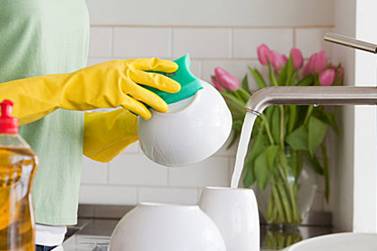 Even the tidiest house hosts multitudes of unwanted guests. You can't see the microscopic moochers, but your next sneeze, sniffle or full-fledged stomach flu might come courtesy of the bacteria and viruses growing by the billions on surfaces you touch every day. Here are 12 top spots where germs lurk and some suggestions for wiping them out. (Hint: Your dishwasher is your new best friend.)

The sponge you use to clean with is the germiest thing in your house, says microbiologist Charles Gerba of the University of Arizona in Tucson. "It's a happy home for bacteria because it's wet, moist and you're always picking up food with it" as you wipe up crumbs and spills, Gerba says. Tuck sponges into the dishwasher before you run it — the heat will kill the salmonella and E. coli hiding within. Another option: Pop your wet (nonmetal) sponges and dishrags in the microwave for about two minutes. Be sure to allow them to cool before retrieving them.

"There's usually more fecal bacteria in your kitchen sink than in your toilet bowl after you flush," says Gerba — whereas many people clean the toilet regularly, they only rinse out the sink. But because your sink is often wet, bacteria from uncooked meat products grow quickly there. Stainless steel sinks should be scrubbed daily with disinfecting cleanser. For ceramic or cast-iron sinks, use diluted bleach (1 tablespoon of water in a gallon of water).

Raw meat and even fresh produce can carry E. coli and salmonella, so cutting boards need to be sanitized after each use. Run plastic boards through the dishwasher and clean wooden ones with diluted bleach.

Water that has been sitting in a pipe all night can become a breeding ground for bacteria that can cause respiratory or stomach illnesses. Run the water for a minute every morning before you shower or fill a glass, says Dr. Kelly Reynolds of the University of Arizona in Tucson.

"What do you do when you're sick? You jump in bed with the TV remote," says Gerba. Clean these regularly with a disinfectant wipe to banish flu and cold viruses.

Like to put your feet up after a long day? Odds are you're sprinkling salmonella, campylobacter and other fecal bacteria on your coffee table, says Gerba. So consider leaving your shoes at the door.

These are a triple whammy: They're contaminated with the cold and flu bugs found in your mouth, and they're often put away wet in a glass or other bacteria-friendly microhabitat. Plus, if they're stored near the toilet, they'll collect aerated fecal bacteria each time you flush. Clean brushes in the dishwasher regularly — and stock up. That way, one is always at the ready. (And don't forget to sanitize the slime-collecting toothbrush holder by running it through the dishwasher.)

Up to 30 percent of people unknowingly carry staph bacteria on their bodies, and a portion of those carry a drug-resistant and sometimes deadly strain called MRSA (methicillin-resistant Staphylococcus aureus), says Reynolds. Don't share hand towels. "We think these are a route of transmission for MRSA," she says. All linens should be washed weekly in hot water and dried in a hot dryer. And don't forget a high-heat cycle in the dryer for the family pet's bed, which is also a hotspot for MRSA.

Nightstands can be a breeding ground for bacteria. Some people eat in bed and the spilled crumbs, along with irregular cleaning, give bacteria the time and food they need to flourish, says Gerba. Other people may be wiping down the nightstand with the germy sponge used to clean the bathroom. Clean nightstands frequently with a clean, damp cloth.

Bacteria thrive in moist environments, so why are there a  lot of microscopic critters in carpet? Germs such as E. coli flourish there, thanks to the crumbs that make up an endless food supply. Regular vacuuming will help.

Turn your keyboard over and shake it. Is there a shower of crumbs? If so, you've likely got millions of pathogens — including MRSA — observing each and every keystroke, says Gerba. Shake the keyboard regularly, and disinfect it with a wipe.

You thought you were cleaning your hands, but in fact, you may have been picking up more germs, since bacteria can survive and grow on bars of soap. Liquid soap in a disposable dispenser is a better option — and be sure to recycle when you're finished.