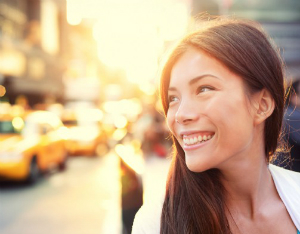 Young adults who are more outgoing or emotionally stable are happier in later life than their introverted counterparts, according to new research led by the University of Southampton.

Dr Catharine Gale from the Medical Research Council’s Lifecourse Epidemiology Unit, University of Southampton worked with a team from the University of Edinburgh and University College London to examine the effects of neuroticism and extraversion at ages 16 and 26 years on mental wellbeing and life satisfaction at age 60 to 64. They also explored the mediating roles of psychological and physical health.

The study, published in the Journal of Research in Personality, found that personality dispositions by the time of early adulthood have a lasting influence on well-being later in life.

Dr Gale, a Reader in Epidemiology at the University, comments, “Few studies have examined the long-term influence of personality traits in youth on happiness and life satisfaction later in life. We found that extroversion in youth had direct, positive effects on wellbeing and life satisfaction in later life. Neuroticism, in contrast, had a negative impact, largely because it tends to make people more susceptible to feelings of anxiety and depression and to physical health problems.”

The research team used data collected as part of the National Survey for Health and Development (NSHD), conducted by the Medical Research Council. All 4,583 individuals whose data was used were born in 1946 and each one completed a personality inventory at age 16, and then again at age 26. The NSHD has followed a cohort of 5,362 men and women born in England, Scotland and Wales during March 1946 to the present day, collecting data on health and social circumstances.

Questions about sociability, energy, and activity orientation allowed the researchers to assess extroversion versus introversion for each individual. Levels of neuroticism were judged by the answers to questions about emotional stability, mood and distractibility.

Between the ages of 60 and 64, 2,529 of the original participants were surveyed again. They answered a series of questions measuring well-being and their level of satisfaction with life, as well as reported on their mental and physical health. The research team detected a distinct pattern in the answers.

Dr Gale adds, “Understanding what determines how happy people feel in later life is of particular interest because there is good evidence that happier people tend to live longer. In this study we found that levels of neuroticism and extraversion measured over 40 years earlier were strongly predictive of well-being and life satisfaction in older men and women. Personality in youth appears to have an enduring influence on happiness decades later.”