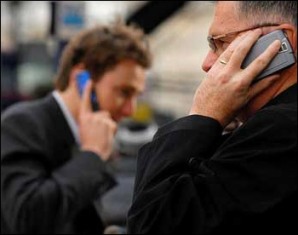 Dr. Yaniv Hamzany of TAU’s Sackler Faculty of Medicine and the Otolaryngology Head and Neck Surgery Department at the Rabin Medical Center in Israel selected saliva for analysis due to the proximity of a cell phone to the salivary gland when in use.

He and his colleagues believed the content of a person’s saliva could hold clues as to whether or not there was a connection between the devices and the risk of developing cancer, the university explained in a statement. They discovered the saliva of heavy cell phone users showed higher levels of oxidative stress than non-users.

Oxidative stress is a process that causes damage to a person’s DNA, as well as other parts of a human cell, through the development of toxic peroxide and free radicals. More to the point, experts consider it to be a major risk factor for cancer. Their research appears in the journal Antioxidants and Redox Signaling.

Hamzany’s team analyzed the saliva content of 20 individuals who were described as heavy cell phone users, meaning they used the devices for at least eight hours each month (though some used their phone for as much as 30 to 40 hours each month).

The content of their saliva was then compared to a control group comprised of deaf men and women who either did not use a cell phone, or utilized the device solely for text messages and similar non-verbal functions. In comparison to the control group, the researchers said the frequent cell phone users had a “significant increase” in every salivary oxidative stress measurements featured in the study.

According to Hamzany, the findings suggest, “there is considerable oxidative stress on the tissue and glands which are close to the cell phone when in use.” That stress, he and his colleagues note, has been linked to cellular and genetic mutations which can lead to the development of cancerous tumors. However, the study stops short of declaring a “cause and effect” relationship between cancer and cell phone use.

“This field of research reflects longstanding concerns about the impact of cell phone use, specifically the effects of radiofrequency non-ionizing electromagnetic radiation on human tissue located close to the ear,” the university said, adding the study results “add to the building evidence that cell phone use may be harmful in the long term.”

The research could also open up new avenues for research in the field, Hamzany and his associates claim. One future study could have individuals submit to saliva analysis both before cell phone use, and again after “several intense minutes of exposure” to the device.

This could allow scientists to see whether or not there is an immediate biological response to the devices, including an increase in the molecules indicative of oxidative stress. Currently, the International Agency for Research on Cancer (IARC) classifies cell phones as carcinogenic category 2b, meaning the organization believes them to be potentially carcinogenic to humans.