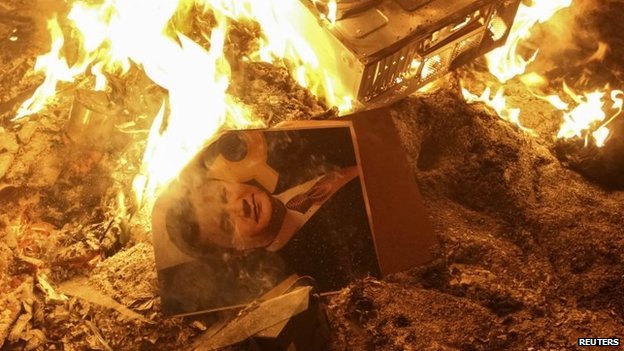 Tear gas and petrol bombs are still being thrown in Independence Square, as Duncan Crawford reports

At least five people have been killed in renewed clashes between police and protesters in central Kiev after a truce agreed on Wednesday broke down.

Some live rounds have been fired but it is not clear by whom. Protesters are throwing petrol bombs, while police are using water cannon.

Three European Union foreign ministers who had travelled to Kiev for talks with President Viktor Yanukovych flew out without seeing him.

The EU will discuss sanctions later.

The BBC's Kevin Bishop, in Kiev, saw five dead bodies in the reception area of the Hotel Ukraine, which all foreign media in the city are using as a base.

Several dozen protesters are using the lobby as a triage centre for wounded, and a priest has just arrived, our correspondent says.

Protesters - some of them armed - are asking hotel guests for blankets to use as bandages.

Earlier, two armoured vehicles were seen in the street leading towards the Maidan, the centre of the protests in Kiev.

The foreign ministers of Germany, Poland and France were supposed to meet Mr Yanukovych and then hold talks with opposition leaders.

However, they cancelled their meetings and flew to Brussels without seeing anyone, for "security reasons", officials said.

Sanctions on Ukraine are likely to be discussed, including a possible ban on sales of equipment that can be used for internal repression.

Thursday has been declared a day of mourning for the dead.

Most of the victims died during clashes on Tuesday - the bloodiest day since the unrest erupted in late November.

The Ukrainian opposition has been long pressing the EU and US to impose sanctions against senior government officials believed to be responsible for the violence against protesters.

Some protesters were praying on the Maidan, as a tense stand-off with police continued

The protests were not confined to Kiev - in Lviv in the west, protesters seized police headquarters

The EU has so far refrained from such a move, preferring to stress dialogue and compromise.

Meanwhile, the US state department announced on Wednesday it had imposed visa bans on 20 members of Ukraine's government.

A senior state department said all those were civilians whom Washington held responsible for the violence. The official declined to provide any names.

Announcing the truce on late on Wednesday, the presidential statement said it was agreed to "start negotiations aimed at stopping the bloodshed, stabilising the situation in the country and achieving social peace".

It did not give details of what the truce would entail or how it would be implemented.

Mr Yatsenyuk confirmed the deal had been reached, saying in a statement on his Fatherland party website that "the main thing is to protect human life".

The media wing of Vitali Klitschko's Udar party said the next round of negotiations with President Yanukovych would resume later on Thursday.

But a BBC correspondent in Kiev, Daniel Sandford, has urged caution, pointing out that none of the hardcore protesters have so far attended talks with the president.

The news came after the most intense violence in Ukraine's three-month crisis turned Kiev into a battle zone between anti-government protesters and riot police.

The protests first erupted when President Yanukovych rejected a landmark association and trade deal with the EU in favour of closer ties with Russia.

Since then, the protests spread across Ukraine, with the main demand of snap presidential and parliamentary elections.