that have happened in Ukraine today. 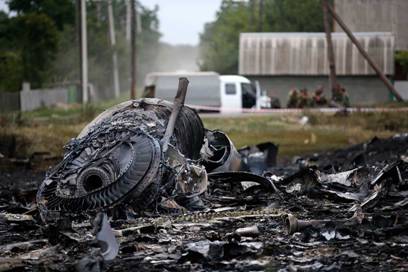 Experts from the Netherlands and Australia were not able to get to the site of the Malaysian Boeing-777 crush in Donetsk region, Interfax reported on Tuesday with a reference to Pieter Jaap Aalbersberg, the head of the international mission.

"Unfortunately, we got no access to the crush cite owing to shooting near Shakhtarsk. After having consulted with the OSCE, the team decided to go back to Donetsk. Our experts and I are very disappointed by the fact that we have not been able to get to the crash site again", he said at a briefing in Kyiv.

The US government is reviewing whether Russia has broken a nuclear arms control treaty, and has warned its NATO allies of Russia’s alleged testing of a new cruise missile.

As reported by the New York Times with a reference to a source in the government, President Obama wrote this in a letter to his Russian counterpart Vladimir Putin on Tuesday.

Such an appeal was made by the chief editor of Polish "Gazeta Wyborcza", Adam Mikhnik, whose letter has been reprinted by 12 leading European periodicals.

A Russian soldier shared some photos of Grad volley fire systems stationed close to the Russia - Ukraine frontier, as reported by the UNIAN.

Mikhail Chugunov visited his profile on July 29 with the last record made on 14 July stating "In the city of Millerovo... Rostov region".

Millerovo is located 20 kilometres away from the Russia-Ukraine border.

In addition, the soldier of the Russian Federation shared his snaps of many Grad systems and an IL-76 plane, which "was designated for transferring vehicles and us (Russian drivers) to the border with Ukraine...".

10 soldiers were killed, 55 others wounded in the past 24 hours of the ATO, Spokesman for Ukrainian National Security and Defence Council Andriy Lysenko reported at a briefing.

He also confirmed information about numerous casualties among servicemen of the Aidar battalion.

Insurgents shot up a minibus with children: one killed, ten wounded

Militants shot up a minibus with children, which were being evacuated from children's homes. One child was killed, ten others got wounded, Head of "Information resistance" Group Dmitry Tymchuk reports.

According to him, the tragedy happened on Monday on a troubled section of a highway between Donetsk and Volnovakha.