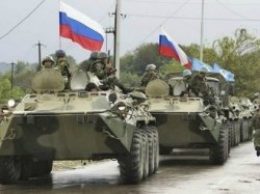 The military  prosecuting general authority of the  Russian Federation said information about the death of Pskov paratroopers is not to be disclosed, for it is a state secret, an official statement of the  Military Prosecutor's General Office reads answering an inquiry made by Pskov  regional meeting member Lev Shlosberg.

He has published it in his blog on "Echo of Moscow" website.

Columns transporting heavy armaments, professional soldiers and lots of AK-74s equipped with laser sights are moving from the Russian side toward Donbas, a spokesman for Ukrainian National Security and Defence Council (NSDC) Andriy Lysenko reported at a briefing.

At the same time, Lysenko mentioned that OSCE observers had spotted a convoy of 17 ZIL trucks on Sunday near the settlement of Sverdlov, which is 15 km away from Donetsk. 15 trucks were loaded with Grad systems.

Another convoy of KAMAZ trucks was observed near the settlement of Zugres. 12 of them were transporting 122-mm howitzers.

Two died in Donbas in the past 24 hours

Two Ukrainian service members were killed in Donbas in the past 24 hours, a spokesman for Ukrainian National Security and Defence Council (NSDC) Andriy Lysenko reported at a briefing.

He noted that, unfortunately, there were casualties.

Insurgents intensify shelling: 13 overnight and 65 during the day

Rebels attacked positions of Ukrainian forces in Donbas region 65 times in the past 24 hours, according to information provided by the "Information Resistance" group and published by Dmytro Tymchuk on the morning of November 10.

13 and 6 attacks in the Donetsk and Lugansk directions respectively were carried out by Russian forces and terrorists".

The OBSE monitoring mission spotted 17 ZIL trucks without any marking at 11:20 in the village of Sverdlove, which is 15 km from Donetsk; five of them were loaded with Grad systems, two trucks were carrying ammunition.

Another convoy consisting of 17 KAMAZ trucks moving to the West was recorded at 11:35 near the town of Zugres situated 41 km to the west from Donetsk.  According to observers, 12 of these trucks were towing 122-millimetre howitzers.

Journalists reported about new warlike equipment on the outskirts of Donetsk on the Tuesday morning of November 10 in Twitter.