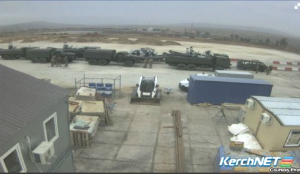 3 service members died near the settlement of Berezove; 9 rebels shot

According to ATO spokesman Volodymyr Selezniov, rebels fired upon positions of ATO forces 17 times in the past 24 hours, two armed clashes were registered too.

ATO forces got under fire near the village of Starognativka. No losses among Ukrainian military were reported.

In addition, a short fight took place near the settlement of Berezove. Three Ukrainian soldiers died, two others were wounded.

A National Guard roadblock near the town of Krymske was fired at by rebels using mortars and small arms. There were no casualties reported among Ukrainian service members.

Insurgents to reinforce their positions in a number of Ukrainian cities and towns; equipment movements within rebel-held territories

Rebels of Donbas have reinforced their positions in Donetsk, Lugansk, Stanyza Luganska, and in a number of other settlements; materiel has also been transferred there, the head of the “Information Resistance “group Dmytro Tymchuk posted on his  Facebook. Wall.

"Some further measures are carried out by insurgents to support combat units of Russian and terrorist troops. In particular, a new artillery unit was deployed in the area to the east of the settlement of Chornukhine (the left flank of the Debaltseve base)", he writes.

Artillery equipment is moving up to Stanyza Luganska which is near the settlement of Mykolayivka. Military hardware was transferred to the north side of the region (20 hardware pieces including tanks were seen on the move in the past 24 hours), the IR group reported.

Russia ferries its military equipment across the Kerch strait

Russian military equipment was spotted lining up for the Kerch ferry.

They were recorded manoeuvring in the Krym port by local CCTV cameras, as reported by Krym  Realii.

According to the media, there were about 7 pieces of materiel mainly trucks and boats on trailers there.

5 Ukrainian servicemen were killed, and 10 others wounded in the past 24 hours, a spokesman for the Ukrainian National Security and Defence Council (NSDC) Andriy Lysenko said at a briefing. In particular, 3 soldiers were killed and 3 wounded in a fight near the village of Berezove, Donetsk region.

According to Lysenko, rebels carried out attacks on a Ukrainian stronghold near the village of Berezove in the Donetsk direction using mortars and grenade launchers.

The attack was repelled, and the rebels suffered losses amounted to some10 gunmen.

"Unfortunately, three Ukrainian soldiers died and three others were wounded as a result of fighting ", Lysenko said.

Apart from that, about 400 people are still missing, 399 are in captivity.

"There is still a lot to be clarified. There are approximately 400 people, who are missing. We can't provide any statistics just yet. 399 service members are still held hostage, 4049 have been wounded so far", Lysenko said.