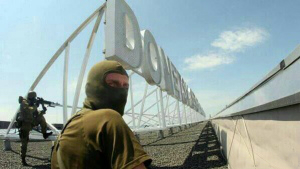 The mission noted that people crossed the border individually, in small groups, but recently also in large groups.

NATIONAL SECURITY AND DEFENSE COUNCIL: 4 soldiers die, and 19 wounded in the ATO area

The ATO press service estimated earlier the number of wounded Ukrainian soldiers at 18.

Seventh Putin's “humanitarian convoy” will be sent to Donbas tomorrow

Russia moves 200 tanks and 190 aircraft to the Ukrainian border

Russia's Deputy Permanent Representative to the UN Alexander Pankin said during an emergency meeting of the UN Security Council that there was no evidence that Russia had moved its troops through the Ukrainian border.