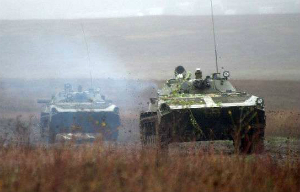 Gunmen fired at the village of Tryokhizbenka: a child killed

A child of five was killed as a result of mortar fire; her mother is treated in intensive care, a spokesperson for the Lugansk regional police headquarters, Tatiana Pogukay, reported.

According to her, the village, which is under control of the Ukrainian army, was mortared at 9 in the morning; two people were taken to hospital one of which died later that day.

1 soldier died, and 6 others wounded in the past 24 hours

1 soldier was killed in the past 24 hours of the anti-terrorist operation, a spokesman for Ukrainian National Security and Defense Council Andriy Lysenko reported at a briefing.

According to him, mercenaries were most active in the Donetsk, Lugansk and Debaltseve directions.

Rebels focused on efforts to destroy communications between Ukrainian defenders of the Donetsk airport and main units of ATO forces in an attempt to seize control over this strategic facility.

Rebels repeatedly carried out mortar strikes on the airport and our positions in the village of Pisky at night.

Terrorists made an attempt to storm the airport the night before. The attack of gunmen was repelled, and the strategic object remains under control of ATO forces. Ukrainian military responded by destroying enemy's positions near the settlement of Spartak and those situated between the settlements of Pisky and Krasnogorsvka.

Rebels have pushed forward two shock forces near the city of Mariupol; a reinforced tactical force has been deployed near the village of Tryokhizbenka;  a number of other rebels' positions have additionally been reinforced, the head of the  "Information Resistance “group, Dmytro Tymchuk, posted on his  Facebook. Wall.

"We detected enemy's shock groups moving forward near Mariupol", he writes. “We are talking about two companies roughly”.