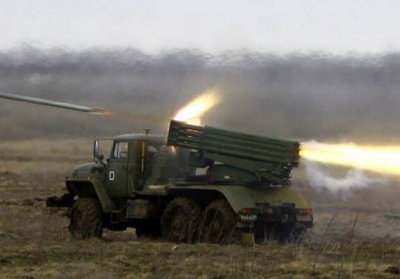 Rebels continued to shell Ukraine-controlled territories of Lugansk region, the head of the Lugansk Regional State Administration Gennady Moskal reported on his website.

Three people died and four others were wounded as a result of shell strikes on the village of Toshkivka carried out by Grad systems. There are 5-year- and 6-month-old children among the wounded.

National Security Council: 2 service members killed and 13 others wounded in the ATO area in the past 24 hours

2 Ukrainian soldiers were killed and 13 others wounded in the past 24 hours in the area of the anti-terrorist operation, a spokesman for the Ukrainian National Security and Defense Council Andriy Lysenko, reported on Monday.

An aviation unit able to control the whole air space of Lugansk region has been transferred to Russia's Rostov region, a spokesman for the Ukrainian National Security and Defence Council, Andriy Lysenko, reported on Monday.

He also noted no armed clashes with terrorists took place along the border outside the ATO area; no cases of violation of Ukrainian air space and use of drones by militants were recorded either.

British Embassy helps Russia to recognize its tanks in Ukraine

The British Embassy in Ukraine has decided to help Russia with identifying its tanks in the territory of Ukraine - the fact still denied by the RF, the embassy reports in Twitter.

In particular, the embassy provides distinctive features of the T-72BM tank, which has never been used by the Ukrainian Armed Forces.

In addition, they posted photos of above mentioned tanks and dates, when they were spotted in the territory of Ukraine.

The National Security Council states that the terrorists carry out fewer attacks on positions of ATO forces, but continue to shell them by artillery according to a spokesman for the Ukrainian National Security and Defence Council Andriy Lysenko.

The most fierce shell strikes on positions of ATO forces were detected in the Donetsk and Debaltseve directions, and also near the Bakhmutka highway.

Shlapak: Ukraine may create a free economic zone in Donbas

The government is reviewing its policy regarding Donetsk and Lugansk regions including a possibility to create a free economic zone in the region, Shlapak said in an interview with the First National Channel.

According to him, the government is working on different scenarios including the one mentioned above.

He also mentioned that the government had passed special decisions to suspend funding these territories.

Militants were unable again to seize the Donetsk airport

Rebels keep trying to impair the situation in Donbas region and finally destroy the fragile truce,  the ATO press-centre reports.

Fighting for the Donetsk airport broke out again this night. Ukrainian troops withstood the attacks despite of rebels' numerous attempts to seize this strategic facility.

Our divisions near the settlements of Uglegorsk, Kamenka, Nikishyno, Maloorlivka and Mayorsk got under fire, too.

Ukraine lost two service members in the past 24 hours, 13 others received different types of wounds in fights against terrorists.