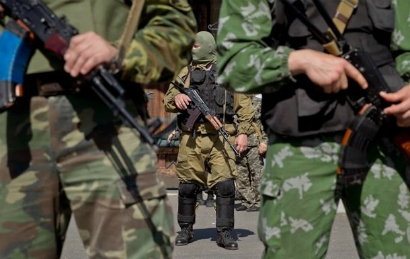 Rebels' top activity was observed in the Lugansk, Donetsk, Debaltseve and Mariupol directions,  the ATO press-center reports on December 1.

Attacks on the Donetsk airport  still go on.

The situation near Mariupol is under control of Ukrainian troops, ATO press-centre underlined.

According to the document, a convoy of 43 trucks with inscriptions saying "Humanitarian aid from the Russian Federation" crossed the Ukrainian border at 8:42 through the Russian checkpoint "Donetsk".

Apart from the petrol tankers, there were 21 trucks and four additional cars in the column.

3 soldiers killed and 14 wounded in the past 24 hours

3 military died, and 14 others were wounded in the area of the anti-terrorist operation, a spokesman for the Ukrainian National Security and Defence Council (NSDC), Andriy Lysenko, reported at a briefing.

US Ambassador: NATO recognizes Georgia's aspiration for membership; Ukraine has none

NATO members take into account and consider a request declared by Georgian authorities to become a full member of the alliance, US Ambassador to NATO Douglas Lute said at a press conference on Monday, as reported by a correspondent of the European Truth in Brussels.

"Georgia is only one of the four countries that has made decisions to progress towards NATO membership. By the way, Ukraine is not on that list", the State Department representative said. "Georgia is one of the key partners of the alliance," he also added.

It should be noted here that the plan of enhanced cooperation between NATO and Georgia adopted at the NATO summit in Wales points out that it aims at preparing the country for possible full membership in the organization.

The leadership of the Russia-Ukraine Cease-Fire Centre went to the Donetsk airport on Tuesday morning, the ATO press-centre posted on its Facebook wall.

The trip is aimed at ceasing attacks on strategic facilities and decreasing the currently high level of tension on both sides, the press centre reports.

The statement reads that 11 armed attacks had been observed near the Donetsk airport by13:00 on Monday.