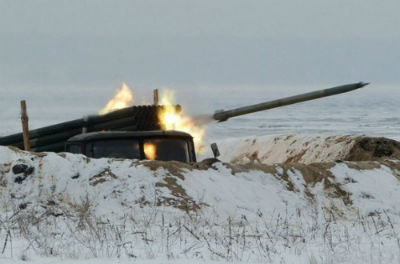 Envoy: Ukraine expects from the EU at least defensive weapons

He told euronews that the attacks which killed at least seven people and injured 20 hit a local airport and residential areas.

They come just one day ahead of peace talks in Minsk, Belarus between France, Germany, Russia and Ukraine.

Ukraine’s Ambassador to EU Konstyantyn Yelisieiev: We strongly condemn what happened. The victims of this attack were civilians. So the number of civilian casualties over the last week has reached somewhere around 300 people. This is a very negative signal on the eve of important diplomatic efforts to end the bloodshed.

Euronews: On Wednesday, a very important meeting will take place in Minsk. Many politicians in the EU and Ukraine describe it as the last chance.

Konstyantyn Yelisieiev: Of course, we can’t expect that everything will be solved quickly. But at first phase the bloodshed should be stopped and a ceasefire declared, especially by terrorists supported by the Russian Federation – it is extremely important. And after the fire had stopped, we can talk and negotiate diplomatically a provisional agreement. And we are ready for compromises. There can’t compromise on one thing – and that’s the territorial integrity and independence of the Ukrainian state.

Euronews: Do you see any differences in the positions here in the EU? Do you see a pro-Russian stance of some countries?

Konstyantyn Yelisieiev: What is extremely important today is not only that sanctions against the country that is the aggressor. But it is important for the EU to maintain unity. Moscow is trying to break this unity. The second challenge – is to keep the so-called transatlantic unity. That’s why we are reassured by the recent visit of the German Chancellor to Washington.

Euronews: What further steps can the EU make to support Ukraine?

Konstyantyn Yelisieiev: Up to now, the EU adopted more than 20 different declarations about Ukraine for over the last year. The intentions are good, but we need concrete action, such as providing us at this stage with military aid, or at least defensive weapons

According to the latest news, 16 people died in Kramatorsk as a result of shelling resident quarters and the General Staff.

In general, there were 64 casualties reported, 29 of which were servicemen and the rest were civilians, the press office of the President wrote in a report on Mr Poroshenko's visit of Kramatorsk.

According to the Security Service of Ukraine, the number of houses damaged in the artillery attack reached 41.

As reported earlier, rebels fired upon Kramatorsk with artillery on February 10 targeting the ATO Headquarters, but also hit houses of city dwellers.

ATO Headquarters: Outlaws carried out three attacks from the side of the Russian Federation; ATO forces eliminated 87 rebels in the past 24 hours

On the night of 11 February, Donbas insurgents carried out 27 attacks on army positions, with the largest number of strikes in the Lugansk direction, the ATO press centre reported on the morning of February 11.

"The village of Verkhnya Vilkhova was fired upon three times with Grad volley fire systems from the side of the Russian Federation," the ATO press centre reports.

Rebel activity was also spotted in the Debaltseve direction. The town of Debaltseve itself was attacked three times overnight. The settlements of Popasna, Zolote, and Luganske were also shelled.

In the Mariupol direction, Pavlopol and Novosellivka were hit twice.

"Our artillery responded to rebel strikes with a number of attacks; rebels suffered significant losses," the ATO press centre announced.

National Security Council: 19 service members killed, and 78 others wounded in the ATO area

Nineteen Ukrainian servicemen have been killed as a result of artillery attacks near the Hostra Mohyla barrow in the vicinity of Debaltseve, Donetsk region, spokesman for the General Staff of the Ukrainian Armed Forces of Ukraine Vladislav Selezniov has said.

"In the area of the Hostra Mohyla barrow as a result of artillery attacks and fighting Ukraine has lost 19 soldiers, including 17 servicemen of the Armed Forces of Ukraine and two officers of the Interior Ministry," he said at a briefing on Wednesday morning.

Selezniov added that 78 soldiers received injuries of varying severity. They have been hospitalized.

Prime Minister: Some components of hybrid warfare observed in Latvia

Particular elements of hybrid warfare can already be seen clearly in Latvia, in the mass media sphere in particular,

"We can see that Russia's statements on human rights in Latvia are being distributed by a number of officials. This is one of the components. Our security services are working on it. I am confident in their ability to prevent both cyber-attacks, and all sorts of provocations, which can be expected," she said.

Laimdota Straujuma stressed that Latvia keeps an eye upon events and NATO is increasing its military presence in the region.

"Yesterday, a sabotage and reconnaissance group of rebels made an attempt to take over the town police department in Debaltseve. Police officers and fighters of the MIA special enforcement unit "Artemivsk" drove back rebel commandos, who did not expect such a fierce opposition," he said.

"The chief of the district police department, Colonel Yevgen Yukhanov, heroically perished. The Ukrainian police lost one of its best officers," he added.

Militants fire upon the town of Schastya and hit a hospital

The town of Schastya in Lugansk region was mortared on Wednesday after 2 o'clock a.m. by rebels. Several shells blasted in the yard of the town hospital, the press service of Chairman of the Lugansk Regional State Administration Gennady Moskal reported.

According to him, one ambulance burnt, a part of the roof was ruined, and the facade and entrance doors were damaged. No casualties were reported.

In addition, the village of Novotoshkivka situated near the 29 checkpoint in Popasna district was severely shelled several times.

PRD rebels continue to shell Debaltseve; they have made two attempts to storm army positions in the town, a spokesman for the ATO, Andriy Lysenko, reported at a briefing on Wednesday.

"Rebels carried out over 10 attacks on positions of Ukrainian troops with Grad volley fire systems, mortars and tanks,” Lysenko said.

"After having shelled them, militants attempted to storm our positions," he added.

"All attacks were repelled," Lysenko stated.

Poroshenko is ready to proclaim martial law. All will become clear after the Minsk meeting

The state authorities are ready to proclaim martial law, in case the situation in the east of Ukraine goes worse,

Poroshenko stressed that it would depend on the results of the negotiation, whether we could manage to stop the aggressor by diplomatic means, or would have to switch to an entirely different mode".

"Both the government and I are ready to make decision regarding proclaiming martial law in the territory of Ukraine," he said

"I am not going to postpone this decision, should irresponsible actions of the aggressor cause a further serious escalation of the conflict," he stressed.

"I am sure that our country will be able to protect itself, and everyone will do everything possible to prove that the victory is ours. But I emphasize that I am the president of peace, and the situation in Donbas cannot be solved by military means," he added.