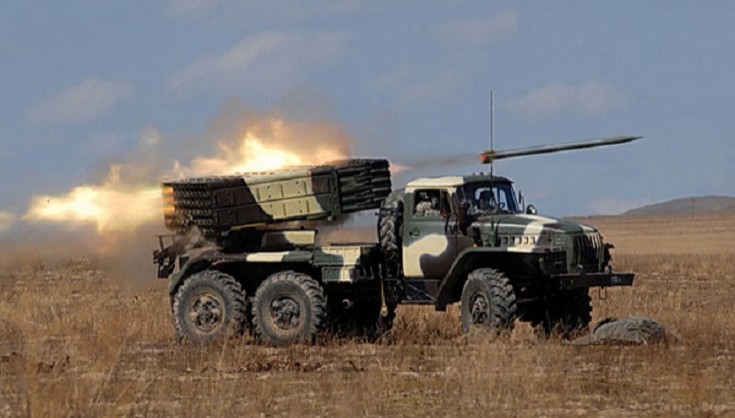 Russian and terrorist armed groups repeatedly violated the Minsk agreements on the night of 19 to 20 March.

"The enemy carried out attacks on positions of Ukrainian troops with heavy armaments, which should have been pulled back at a distance of at least 25 kilometres from the demarcation line earlier this month," the ATO press centre reports.

In the Donetsk direction, our check points near Krasnogorivka and Pisky were attacked with 120mm mortars.

The intensification of rebel provocations was also recorded last night in the Lugansk direction. Separatists committed to action BM-21 Grad volley fire systems to shell ATO forces near the village of Sokolnyky at 9.35 p.m.

A Ukrainian checkpoint near the village of Donetske was shelled with 120mm mortars at 9.45 p.m.

In the Mariupol direction, rebels fired on the village of Shyrokine three times with machine-guns and grenade launchers.

No clashes were recorded in the Artemivsk direction.

In general, outlawed units of gunmen resorted to arms 10 times in the period between 8.00 p.m. and midnight. Five other violations were recorded between midnight and 7.00 a.m.

A bridge across the river Siversky Donets in Stanytsia Luganska was destroyed in a powerful explosion, the governor of the Luhansk region, Gennadiy Moskal, stated.

"At around 6:00 p.m. yesterday, the Ukrainian army positions near the bridge across the Siversky Donets in Stanytsia Luganska came under fire. After Ukrainian soldiers have fired in response, a fight broke out between the two sides with small arms, machine-guns, grenade launchers and mortars. A powerful explosion occurred in the course of fighting in the centre of the bridge, which then caved in the river. At present, neither vehicles nor pedestrians are able to use this bridge," the governor’s press service reported on Friday.

The bridge near the settlement of Stanytsia Luganska was partially blown up in January 16, and militants of the self-proclaimed People's Republic of Luhansk tried to set up a checkpoint at it on March 16, the press service said.

The bridge was officially closed to traffic by the Ukrainian authority at the beginning of 2015.

Fighting in Shyrokine lasted till late into the night; a soldier wounded

So-called PRD paramilitaries fired upon Shyrokine 10 times in the past 24 hours, and carried out an attack on Chermalyk.

A spokesman for "Sector M" Oleg Sushynsky told 0629 that ATO forces stationed in the sector "M" were attacked in total 11 times in the past 24 hours.

After rebels have attacked the settlement of Shyrokine on March 19, they shelled and fired at Ukrainian troops deployed in and around Chermalyk with grenade launchers, anti-tank weapons, machine-guns in the period of time from 12.47 to 12.50 p.m.

Another assault committing grenade launchers and small arms was carried out in the period from 9.55 to 10.05 p.m.

One service member of the Armed Forces got wounded.

No UAVs were spotted.

No losses were reported in the area of the anti-terrorist operation in the past 24 hours, a spokesman for the Ukrainian National Security and Defence Council, Andriy Lysenko, reported at a briefing on Friday.

General Staff: The situation in the ATO area escalating

The intensity of armed provocations conducted by Donbas rebels increases in all directions, a spokesman for the Ukrainian National Security and Defence Council, Andriy Lysenko, reported at a briefing on Friday.

"The situation in the ATO area has a tendency to escalate. Armed provocations are carried out by rebels along the entire demarcation line," Lysenko said.

According to him, our positions were attacked 4 times with tanks. Additionally, Ukrainian troops stationed near the village of Sokolnyky, which is close to the Bakhmutka highway, were shelled yesterday with Grad MLRSs for the first time this month.

"Today, the enemy has violated the armistice in a number of areas along the entire demarcation line 5 times since midnight," he added.