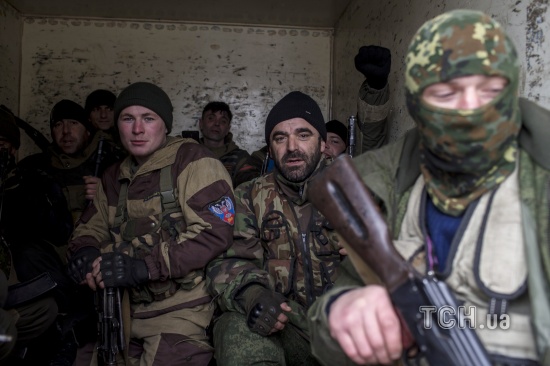 Tymchuk: Militants tighten their grip on defences, and camouflage artillery

"In particular, a further reinforcement of Russian and terrorist forces was recorded to the east of Lugansk (near the settlement of Stanyza Luganska). Military personnel consisting of up to 220 people, a mortar battery including six 120-mm mortars, and 2 cargo platforms with ZU-23-2 AA mounts on them were seen moving to Stanyza Luganska," he writes.

Rebels continue to arrange weapons sites for artillery systems near the settlements of Chornukhine and to the south of Stakhanov, although the main part of artillery has allegedly been "pulled back".  In reality, according to the IRG, "weapons were moved to workshops and hangars of adjacent plants and workshops in Alchevsk, Perevalsk, and Krasny Luch".

"About 30% of artillery that operated in the area during fights for Debaltseve in February this year was disposed laterally and camouflaged," Tymchuk said.

Rebels resorted to arms 17 times along all Donbas front lines on the night of 22 to 23 March the ATO press-centre reported.

Insurgents carried out attacks on the village of Orikhove, Lugansk region, at 1.15 a.m. "clearly demonstrating availability of MLRSs” in violation of the Minsk agreement.

Rebel infantry engaged in fighting with Ukrainian troops near the village of Sokolnyky with small arms about 3 o'clock a.m. "The attack was successfully repelled," the ATO Headquarters announced.

In the Mariupol direction, militants made an "unsuccessful attempt to storm our position near the village of Shyrokine" at 8.00 p.m. This settlement was attacked twice with 120mm mortars and small arms during the night.

The villages of Leninske and Shumy close to Artemivsk came under mortar and machine-gun fire twice in the past 24 hours.

Donbas rebels increasingly use heavy armaments, which are supposed to have been withdrawn from the demarcation line in accordance with the Minsk agreement, the head of the Information Resistance Group, Dmytro Tymchuk, posted in  Facebook on the morning of March 23.

In particular, forward positions of Ukrainian troops stationed near Avdiyivka were shelled with 122-mm artillery - 122-mm self-propelled howitzers 2C1 SAUs "Gvozdika" and a battery of 122-mm D-30 howitzers - 5 times in the past 24 hours. Moreover, artillery strikes were carried out not just using separate canons, but by artillery divisions (batteries).

Also, positions of Ukrainian troops to the south of Avdiyivka and on the south-eastern edge of the town were fired upon with tanks twice. In total, 4 rebel tanks were spotted operating in this area.

The situation in a number of areas near the settlements of Sokolnyky, Tryokhizbenka, and Krymske, to which the enemy was bringing up reinforcements, began to escalate in the past 24 hours. The IRG recorded a movement of a rebel composite company task group consisting of 150 to 160 soldiers, 14 ACVs, 7 tanks, a mortar battery and an antitank platoon. This company task group was moved to flank positions near Sokolnyky.

Ministry of Internal Affairs: Another column of tanks entered into Gorlovka

Another column of materiel consisting of around 10 tanks entered into the rebel-held town of Gorlovka, Donetsk region, an advisor to the Minister of Internal Affairs of Ukraine, Zorian Shkiriak, announced as reported by the press service of the Ministry of Internal Affairs.

"I was informed at night that yet another column consisting of about 10 to 12 tanks had arrived in Gorlovka," he said.

According to Shkiriak, rebels continue to build up their forces in occupied areas of Donetsk and Lugansk regions.

Groysman signs a resolution on the occupied territories of Donbas

The Speaker of the Ukrainian Parliament (the Verkhovna Rada) Volodymyr Groysman has inked a parliamentary resolution declaring several areas of Donetsk and Lugansk regions as temporarily occupied, the Ukrainian parliament reports on its website.

The Verkhovna Rada adopted the resolution on March 17. The document goes into effect on the next day after its release.

Groysman said that the resolution declared separate districts, cities, towns and villages of Donetsk and Lugansk region, to which the law on special local self-government procedures could be applied, as temporarily occupied.

In accordance with the law on special local self-government procedures in some areas of Donetsk and Lugansk regions, a special procedure for local self-governing has to be introduced in these areas until all illegal armed groups, their military hardware, and foreign mercenaries are removed and full Ukrainian government control over the state border is restored, he said.

No losses in the ATO area in the past 24 hours

No losses  among Ukrainian military were reported in the ATO area; six soldiers were wounded, a spokesman for the Ukrainian National Security and Defence Council, Andriy Lysenko, reported at a briefing.

"Fortunately, no Ukrainian military died in the past 24 hours, but six servicemen sustained wounds, Lysenko said.

According to operational data, a number of Russian military sports clubs have set up illegal channels to recruit Russia's citizens for fighting against ATO forces in the east of Ukraine.