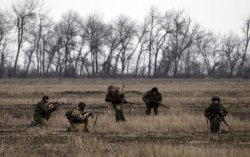 IRG: Rebels fall back near Avdiyivka and attempt an attack near Shyrokine

The most intense situation in the ATO area in the past 24 hours was observed in and around Avdiyivka, the head of the Information Resistance Group, Dmytro Tymchuk, posted in  Facebook on the morning of March 24.

"Rebels carried out multiple attacks with 120-mm mortars, one with 122-mm artillery, and three attacks committing tanks," he noted.

"Additionally, there were armed clashes between Ukrainian troops and rebel groups trying to break through between two Ukrainian checkpoints. The enemy withdrew to the kick-off line being covered with mortar fire," Tymchuk said.

In addition, rebels attacked the village of Pisky, Donetsk district, with 82-mm mortars three times in the past 24 hours. Militants also carried out many attacks on this area with machine-guns and heavy infantry weapons (including heavy machine guns and grenade launchers).

Rebels committed 120-mm and 82-mm mortars near the village of Shyrokine in total 6 times in the past 24 hours.

"Apart from that, forward rebel groups attempted to dislodge divisions of Ukrainian military, who had fortified their positions in the western part of the village," Tymchuk says.

6 units of rebel military hardware including two tanks were seen moving to Shyrokine", he reports.

US Congress calls on Obama to supply weapons to Ukraine

The U.S. House of Representatives passed a resolution on Monday night asking President Obama to send lethal arms to Ukraine, some sources report.

The Monday's act calls on Obama to provide Ukraine with "lethal defensive weapon systems" that would increase Ukraine's ability to "defend its sovereign territory from the continuing aggression of the Russian Federation."

House Speaker John Boehner described the vote as a call for actions, and said that the Congress supported more military aid.

House Democrat Eliot Engel told colleagues it was the time to stop treating the Ukrainian crisis "as a distant conflict."

"This war has left thousands of dead, tens of thousands wounded, a million displaced, and has begun to threaten the European post-Cold War stability," Engel said adding that Russian President Vladimir Putin is "pushing us back to... the bad old days of the Cold War.

Militants continue to increase their fighting efficiency across the entire ATO area, the head of the Information Resistance Group, Dmytro Tymchuk, posted in  Facebook on the morning of March 24.

"Support convoys come to Donetsk via Alchevsk, Debaltseve, and Vuglegirsk. The arrival of 22 vehicles and 4 units of special equipment (4 mobile workshops) was recorded in the past 24 hours," he writes.

"A rebel company tactical group consisting of 100 soldiers, 6 tanks, 8 ACVs and 5 army trucks was moved through Snizhne and Shakhtarsk to the Donetsk area," Tymchuk added.

Heavy armaments of Russian and terrorist forces are built up in an area to the east of Lugansk". An artillery element (3 D-30 howitzers) joined the local artillery battery (4 units of SAU2C1 "Gvozdika"), which had been deployed there earlier).

Commandos target an air-defence military base in Lugansk region

Commandos have attacked a mobile radar system of Ukrainian military stationed in the settlement of Milove, Lugansk region, Chairman of the Lugansk Regional State Administration Gennady Moskal reported  on his webpage.

He says that unidentified individuals attacked a mobile radar system of Ukrainian air-defence forces on the outskirts of Milove (a district centre located in the government-held part of Lugansk region) at 3.30 a.m. Tuesday.

Milove is situated in the north of Lugansk region approximately 200 kilometres from the demarcation line, Moskal says.

No hostilities have ever occurred there; however, the district centre is actually located on the border with the Russian Federation. Apparently, a reconnaissance-subversive group skulked into the town of Milove from Russia's territory intending to destroy our military equipment.

No casualties were reported according to the governor.

First Deputy Head of the faction "Spravedlivaya Rossiya" (Just Russia) Mikhail Emelyanov came forward with this initiative in response to a decision of the US Congress,  RIA Novosti reports.

"We believe that our parliament should not ignore this statement. If the United States start supplying lethal weapons to Ukraine, we should not hesitate to start supporting insurgents, including by shipping arms, and grant our president the right to garrison the territory of Ukraine," Emelyanov told journalists.

As reported earlier, the U.S. House of Representatives passed a resolution calling on President Barrack Obama to immediately provide Ukraine with lethal weapons.

As reported earlier, Russia supports insurgents in Donbas, and supplies them with military equipment and ammunition. In addition, mercenaries, volunteers and Russian regular troops are secretly deployed there.

General Staff: 1 service member killed and 8 others wounded in the ATO area in the past 24 hours

1 military died, and 8 others were wounded in the area of the anti-terrorist operation in the past 24 hours, a spokesman for the Ukrainian National Security and Defence Council, Andriy Lysenko, reported at a briefing on Friday.

An ATO spokesman in Donbas, Andriy Lysenko, said that Ukrainian servicemen monitor the Sea of Azov near Mariupol, and have not observed any enemy activities so far.

He also said that "special artillery divisions have been ordered to secure the coast,” in case rebels make an attempt to enter into Ukraine from the sea.

They monitor the situation within a radius of several dozen kilometers and are strong enough to stop the enemy, Lysenko said.

In addition, engineering units are exercising on the ground. Some areas were mined to obstruct enemy's military operations, he said.

Drones are also used for this purpose.

All the information is collected at the Mariupol headquarters and the Sector M responsible for defending the area, Lysenko said.

Insurgents have requested OSCE observers stop flying UAVs in and around the settlement of Shyrokine, an ATO spokesman, Andriy Lysenko, announced.

He said at a briefing in Kiev on Tuesday that the situation in Shyrokine (the Mariupol direction) remained tense, Interfax-Ukraine  reports.

"Rebels do not stop making attempts to capture Shyrokine. Fighting broke out there yesterday early in the morning; all rebel attacks were repelled.  OSCE observers work in the area constantly, and register all facts of violation of the Minsk agreements on rebels’ part. In particular, a commanding officer of so-called PRD forces refused to provide "green route" for humanitarian aid meant for residents of Shyrokine at the request of OSCE representatives on March 21," Lysenko said.

According to him, observers receive more and more evidence proving that rebels have not drawn off heavy arms from the demarcation line.