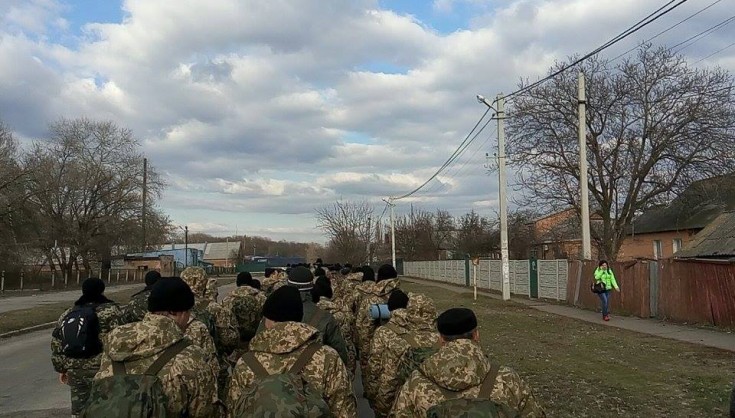 Insurgents carried out 8 attacks on positions of ATO forces in the past 24 hours; rebels brought in heavy artillery

According to the report, the number of militant attacks has decreased, but they still continue to attack Ukrainian troops with heavy artillery.

"In the Donetsk direction, insurgents fired 120-mm mortars upon our positions near the village of Slavne at 8.45 p.m. They also attacked the village of Pisky with small arms and grenade launchers," the press centre announced.

Additionally, rebels committed to action 120-mm mortars near Mariupol. They mortared the village of Shyrokine in the period between 10.55 p.m. and 01.00 a.m.

Militants carried out attacks on army positions near the village of Sokolnyky, Lugansk region, after midnight.

"In general, insurgents fired on our positions seven times in the period of time from 8.00 p.m. March 26 to midnight and once between midnight and 05.00 a.m.," the report says.

General Staff: Military discharged soldiers to come back to positions within a few hours in the event of threat

Veterans will return to their military units within a few hours in the case of threat, Acting Head of the Press Centre of the General Staff, Vladislav Selezniov, reported at a briefing.

"First of all, the military reserves of Ukraine will include discharged soldiers," Selezniov said.

According to the law “On Amendments to the Law on Military Duty and Military Service” adopted by the Verkhovna Rada of Ukraine on March 19, 2015, all discharged soldiers should take responsibilities of reservists, and return to their military units when called to serve whenever  needed, he said.

According to Selezniov, this move is necessary to improve the defence capability of Ukraine, which has to be prepared for all eventualities.

"If Ukraine has to deal with a large-scale military attack on its territory, veterans with extensive combat experience will return to military service within a few hours and take up positions on the defensive line," he said.

General Staff: one service member wounded in the ATO area in the past 24 hours

No losses were reported in the area of the anti-terrorist operation in the past 24 hours, but one soldier sustained wounds, a spokesman for the Ukrainian National Security and Defence Council, Andriy Lysenko, reported at a briefing on Friday.

"One serviceman was wounded as a result of hostilities in the past 24 hours," he said.

According to Lysenko, no cases of attacks with heavy artillery were registered yesterday and today in the morning. At the same time, armed provocations were recorded in the past 24 hours along the entire demarcation line with the exception of eastern districts of Lugansk region.

According to Lysenko, the enemy continues to conduct active air reconnaissance.

7UAVs were spotted in the Mariupol direction in the past 24 hours.