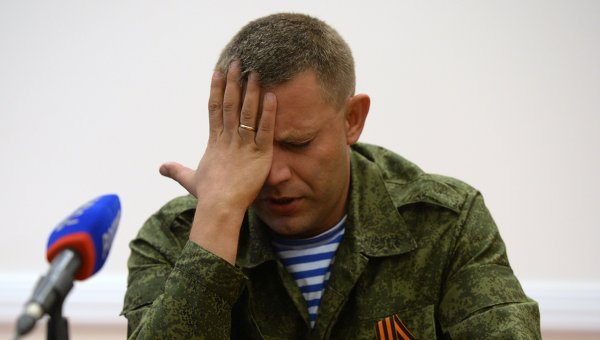 Zakharchenko announced a program to selectively disarm the militia

The leader of the illegal formation "PRD", Alexander Zakharchenko, ordered to disarm gunmen, a website of the occupying authority reports according to 0629. Zakharchenko demands that gunmen, who are not subordinated to him and do not belong to republic‘s "law enforcement units", turn in weapons.

The "decree" states that people who do not execute the order within the fixed term will be considered as members of outlawed units, thus disarmed by way of carrying out special operations and bringing them to criminal responsibility in accordance with the acting legislation of the PRD."

Spokesman for the sector "M": Rebels carry out three attacks on the outskirts of Mariupol

As reported earlier, rebels regularly centre fire on the village of Shyrokine, which is located near Mariupol.

Sushynsky also announced on March 27 that terrorists had attacked a car of the SMM OSCE near Mariupol. No casualties were reported.

A rebel group neared a destroyed bridge over the Siversky Donets situated near Tryokhizbenka at about 7.30 pm on March 29, and fired on a stronghold of ATO forces with submachine guns and grenade launchers, the head of the Lugansk Regional State Administration, Gennady Moskal, reported on his website.

Militants approached the bridge from an area controlled by the so-called "PRL", and moved away after retaliation fire was opened.

Two Ukrainian military sustained wounds as a result of the rebel attack. One of them was taken to hospital in critical condition, and doctors are fighting to his life now.

"Hostilities were recorded in several other directions overnight," Moskal said.

"Clashes between Ukrainian troops and rebels stationed in Sokolnyky occurred on the outskirts of Krymske; mine explosions could be heard near the Bakhmutka highway, and machine-gun battles broke out  in Stanyzia Luganska several times last night," he said.

No casualties among the civilian population were reported.

General Staff: 1 service member killed and 3 others wounded in the ATO area in the past 24 hours

1 military died, and 3 others were wounded in the area of the anti-terrorist operation in the past 24 hours, a spokesman for the Ukrainian National Security and Defence Council, Andriy Lysenko, reported at a briefing on Monday.

According to Lysenko, the situation in Eastern Ukraine is gradually becoming stable.

No cases of using armoured vehicles, barrel and rocket-launching artillery were registered in the past 24 hours.

At the same time, armed provocations occurred along the entire demarcation line with the exception of eastern districts of Lugansk region, he said.