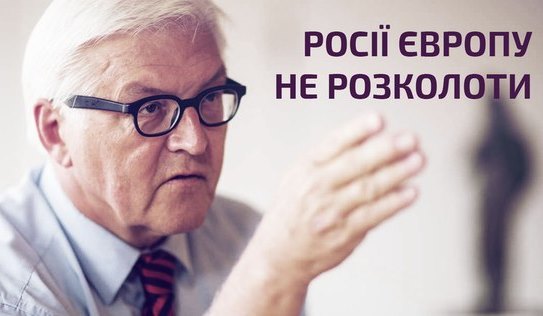 Steinmeier: Russia will not succeed in rifting Europe

Russia will fail in its attempt to split the European Union, although some assumptions have been voiced recently that Moscow may lift an embargo on the import of food from those countries that are more friendly to the Kremlin, German Foreign Minister Frank-Walter Steinmeier said during his visit to Lithuania, as reported by Delfi.

"Maybe, such attempts are made; they may be made in the future. Some attempts have been made, but they are not successful," Steinmeier said when asked about Moscow's possible decision to allow food imports from certain countries.

As reported earlier, Russia placed proposals for relaxing the embargo against Greece.

US paratroopers arrive in Ukraine to train military

As reported earlier, Interior Minister Arsen Avakov said that the joint exercises of 290 marines from the 173rd U.S. Airborne Brigade and 900 fighters from National Guard combat units would start at the Yavorivskiy training camp situated in Lviv region on April 20.

"After completing the exercises, the U.S. partners will provide the National Guard units with special ammunition and communications equipment," Avakov asserted.

Zakharchenko announces he is willing to hold

a second "referendum" on "Donbas independence"

Rebel leaders are ready to hold another referendum on the status of the so-called "People's Republic of Donetsk", the self-proclaimed "PRD leader", Alexander Zakharchenko, told the separatist source "Donetsk News Agency".

"Russian President Vladimir Putin stressed once again during his ‘direct line’ that there was no alternative to a political settlement of the situation in Donbas. He also said that Donbas residents should be granted the right to decide how they live, who with, and under what conditions," Zakharchenko said.

The results of the referendums were not officially recognized.

“As of early April, we know that Russian military forces continue to operate in eastern Ukraine," Harf said at a Thursday briefing. According to Harf, "Despite announcements regarding a full withdrawal of heavy weapons, pro-Russian separatists keep heavy weapons close to front lines, thereby violating the Minsk agreement. Russia has its control elements in eastern Ukraine in order to be able to coordinate military operations. Russia sets up training camps in eastern Ukraine to train insurgents in gunnery." Additionally, the U.S. Department of State believes that Western sanctions imposed against Russia seriously hurt Russian economy.

"Absolutely," Harf said when asked, whether sanctions imposed against Russia had made any impact. The longer they're in place the more influential they are, Harf said.

Insurgents violated the Minsk ceasefire deal 15 times in the period between 6 pm, April 16 and midnight; they carried out two attacks on inhabited settlements, the ATO press-centre reports.

Moreover, illegal paramilitaries committed 120-mm mortars 4 times, which is a serious violation of the Minsk agreements.

"Militants fired 120mm mortars twice on a fortified position of the Ukrainian armed forces near the village of Pisky," a report reads.

"Rebels also fired 120mm mortars upon our fortified position near the village of Talakivka close to Mariupol at about 11pm. They also attacked with automatic grenade launchers and machine guns near the towns of Avdiivka and Popasna, and the village of Opytne," it says.

Rebels mortared positions of the Ukrainian army near the village of Syze in Stanychno-Luhansk district, Lugansk region.

"Pro-Russian insurgents increased the number of attacks on residential areas. They fired machine guns and 120-mm mortars on the village of Pisky twice in the period from 9 to 9.50 pm," the headquarters said.

"According to a report, insurgents also fired 120mm mortars on the town of Avdiivka on April 16."

"During this period, the Ukrainian army recorded five enemy drones over Lugansk region and Mariupol. One of them was shot down by Ukrainian anti-aircraft mount when flying past Butkivka, Starobilsk district,” the headquarters said.

Moskal: Hostilities continue in the village of Katerynivka, Lugansk region

Armed clashes were going on in Katerynivka, Lugansk region, from the second half of Thursday and into the night, Head of Lugansk Regional State Administration, Gennady Moskal, reported on his official page.

According to him, the village of Katerynivka, Popasna district, was the only inhabited settlement under fire on April 16.

Fighting with machine guns, grenade launchers, and then APCs was continuing by spells on the outskirts of Katerynivka from 4 pm and until late into the night.

No residential houses or infrastructure was destructed, no civilians were hurt, and no information on the number of dead or wounded was received. It was peaceful in the village this morning, the state administration reported.

Apart from Katerynivka, there were a number of clashes recorded in Krymske, near Novotoshkivka and on the outskirts of Popasna. The ceasefire agreement was observed in other flash points of Lugansk region.

No soldiers died, but 1 serviceman sustained wounds in the ATO area in the past 24 hours, a spokesman for the Ukrainian National Security and Defence Council, MP Andriy Lysenko, reported at a briefing.

He noted that rebels had carried out a number of attacks in the past 24 hours, namely they had fired 122-mm mortars 5 times, and 122-mm cannons twice.

Shyrokine, Talakivka, areas around the Donetsk airport and the suburbs of Gorlivka were reportedly among the flash points.

Additionally, 10 UAVs were spotted over the ATO area, one of which was downed.