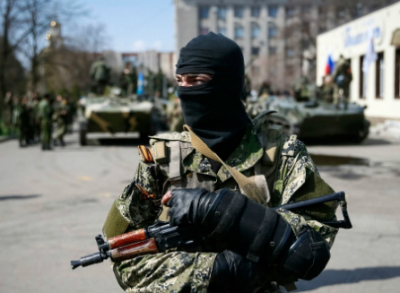 Insurgents violated the ceasefire deal 6 times over the period from 6 pm April 19 to midnight along the demarcation line in Donbas, the ATO press centre  reported drawing additional attention to the fact that rebel activity has started to decrease.

The enemy shelled ATO strongholds near Avdiyivka two times with 120-mm mortars and once with AA mounts.

A number of positions of Ukrainian troops were shelled with 120-mm mortars near Pisky.

In addition, a rebel sniper placed fire on a Ukrainian stronghold near the village of Opytne; a group of insurgents fired machine guns on army positions near the town of Krasnogorivka, Mariinsky District.

It was peaceful in Lugansk Region during this period. No attacks on inhabited settlements were recorded there.

Moreover, Ukrainian troops recorded 6 UAVs flying past the settlements of Talakivka, Shyrokine, Orlovske, and Volodarske located in the south of Donetsk Region.

IRG: Rebels rotate forces and make up deficiencies near Shyrokine and other settlements

Militants actively move forces, reposition equipment across the occupied territories of Donbas, and conduct intensive engineer activities in a number of sectors, the founder of the Information Resistance Group, Dmytro Tymchuk, posted in  Facebook on the morning of April 20.

In particular, the enemy regrouped forces in the area between Donetsk and Frunze. A column of military hardware (including 3 tanks) was moved to Novotoshkivka.

"Insurgents continued to re-equip and rotate their tactical task forces fighting for Shyrokine and near Pavlopol. A 120-strong tactical task group was redeployed to Shyrokine," Tymchuk said.

Apart from that, 38 vehicles, including fuel servicing trucks and vehicles with special equipment were observed moving from the Russian Federation carrying material and technical resources for rebels.

A convoy consisting of 6 trucks, 2 special purpose vehicles and one bus accompanied by one UAZ-469 and 2 APC-80s was spotted moving from Alchevsk to Stakhanov.

4 tented trucks were observed near Krasny Luch heading in the direction of Faschivka and Debaltseve accompanied by one ICV-2.

A column of 8 military trucks went through Kuibyshevsky District of the Donetsk city heading north toward the settlement of Yasynuvata.

Yet another shipment of APCs (12 units) arrived at a transportation terminal unit from the RF, which are going to be used to form a new battalion tactical task group. "Also, 6 tanks were prepared for shipment to the north (3 of them were T-72B3 ones) at this terminal unit," Tymchuk said.

"Rebels have concentrated about 50 various tanks in the area between Avdiyivka and Maryinka so far (12 of them are being repaired)," he said.

"As of today, six large individual units of 5,500-6000 people are stationed in Luhansk. They consist of the military of the Russian Armed Forces disguised as insurgents, Russian mercenaries and local militia," he said.

According to Tymchuk, about 3,000 Russian soldiers, mercenaries and militants of the PRL terrorist organization have been spotted in the villages near Lugansk, mostly in the Kamianobridskiy and Stanytsia Luganska districts.

"We have observed a build-up of militant artillery to the south of Lugansk," Tymchuk said.

According to him, the number of attacks in the ATO area was seemingly decreasing.

However, there were 5 attacks on positions of ATO forces with 120-mm mortars recorded in the Donetsk direction. Additionally, 17 enemy drones were spotted in Donetsk Region in the past 24 hours.

Russia continues to arm insurgents and builds up its military presence in Donbas, a spokesman for the Ukrainian National Security and Defence Council, Andriy Lysenko, reported at a briefing on Monday.

"According to an intelligence report, 50 military Ural trucks and 20 ICVs with personnel on board  went from the territory of the Russian Federation through the Dovzhanskiy border check point  toward the town of Debaltseve over the past few days," he said.

Apart from that, according to him, a freight train consisting of around 40 freight cars carrying military hardware, which was covered with tents, went past the Dovzhanskiy railway station located in the town of Sverdlovsk, Lugansk region, from the Russian territory.