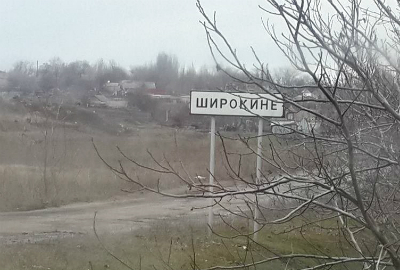 "Rebels launched a mortar attack on positions of the Azov regiment at 6.40 pm, after the OSCE mission had left the village of Shyrokine. Rebels' shells primarily hit residential houses," Azov states.

"Servicemen of the Azov regiment reported on tanks moving up from the inhabited settlement of Sakhanka," it says.

Insurgents increasing the number of attacks; a village comes under fire

Pro-Russian rebels attacked army positions 20 times in the period from 6 pm to midnight Tuesday, the ATO press service posted in Facebook on Wednesday.

According to the report, insurgents fired 120-mm mortars eight times on positions of Ukrainian forces. In addition, militants attacked the village of Leninske in Dzerzhinsky district, Donetsk region, with mortars at 11.25 pm.

Insurgents fired automatic grenade launchers on Ukrainian positions near the village of Schastya, Lugansk region, and machine-guns near the town of Zolote.

According to the report, the Ukrainian army spotted five UAVs in the past 24 hours mainly over Donetsk region.

Militants attempt to break through security lines of ATO forces;

Insurgents unsuccessfully attempted to cut behind Ukrainian troops in several sectors in the past 24 hours, the founder of the Information Resistance Group, MP Dmytro Tymchuk, posted in   Facebook on the morning of February 22.

"Ukrainian officials recorded several attempts by rebel sabotage and reconnaissance groups to attack Ukrainian rear areas bypassing our front line strongpoints in multiple sectors simultaneously. However, SRGs were noticed by military guard units of ATO forces and had to fall back," he writes.

In addition, the IRG reported on increasing rebel activity in the Lugansk direction. In particular, positions of Ukrainian troops were attacked with machine-guns and mortars near the settlements of Vesela Gora and Schastya.

In general, insurgents carried out nearly 20 attacks on army positions in the past 24 hours. Apart from small arms, terrorists employed AT assault weapons, 82-mm and 120-mm mortars, and military hardware, such as tanks.

In particular, rebels fired on army positions near the settlements of Pisky, Opytne, Avdiyivka, Leninske, Shumy, and Shyrokine.

A rebel armoured unit, which had been repositioned instead of demonstratively withdrawn tanks, neared front lines in Shyrokine and fired on ATO positions.

'Tanks are usually supported with heavy machine gun and mortar fire at intense rate. Rebels cover in such a way manoeuvres of their materiel at the front protecting it from being destroyed by Ukrainian AT assault weapons," Tymchuk wrote.

Rebels also attempted to destroy a number of engineering constructions, namely fortifications built by Ukrainian troops, with AT assault weapons directly on front lines near Avdiyivka, he reports.

Tymchuk: Insurgents intensify their activity in the Lugansk direction

Militants have resumed hostilities in the Lugansk direction in the past 24 hours with attacks on the village of Vesela Gora and the town of Schastya, the founder of the Information Resistance Group, MP Dmytro Tymchuk, posted in   Facebook on the morning of April 22.

"Further intensification of activities of Russian and terrorist forces was observed in the Lugansk direction. In particular, positions of Ukrainian troops were attacked with machine-guns and mortars near Vesela Gora and Schastya," he wrote.

"At the same time, military hardware was observed moving in small groups from Krasnodon and Sverdlovsk to Lugansk. Repositioning of 16 units of equipment - mainly armoured personnel carriers and multi-purpose light-armoured towing vehicles (11 units), 3 tanks and 2 ICV-2s - was recorded by our troops in Donbas in the past 24 hours," Tymchuk said.

"Rebel materiel is normally relocated by Russian military," he noted.

The command of the Russian-backed militants has carried out reconnaissance over fortifications of Ukrainian troops on the Azov shore, head of the Information Resistance group Dmytro Tymchuk wrote in Facebook on Wednesday.

According to Tymchuk, the Ukrainian army recorded several reconnaissance drones along the coast to the west of Mariupol.

To the west of the village of Telmanove, the militants equipped a platoon fortified position. For this purpose, they moved engineering equipment from the town of Komsomolsk including a grader and an excavator.

Ukrainian military positions on the outskirts of Troitske (Popasna district near Debaltseve) were attacked by militants with automatic weapons all night, the press service of the Lugansk State Administration reported.

The press service also added that the last attack had been registered at 5.45 am, Wednesday.

Armed clashes occurred near Schastya, Lugansk region, the day before, where fortified Ukrainian positions were attacked with machine-guns. The attack was carried out from Vesela Hora, which is held by rebels, the press service said.

Another skirmish took place near the Bakhmutka highway, and one morel near the 29th checkpoint in Stanytsia Luganska.

"No civilians were hit; no information on casualties among servicemen was received. It was calm near other flash points of Donbas," a report reads.

No losses were reported in the area of the anti-terrorist operation in the past 24 hours, a spokesman for the Ukrainian National Security and Defence Council, Andriy Lysenko, reported at a briefing on Wednesday.

"No Ukrainian serviceman was killed or wounded in the past 24 hours," Lysenko said.

However, the ATO spokesman stressed that terrorists had not stopped their armed provocations, among which attacks with banned heavy armaments that were supposed to have been withdrawn.