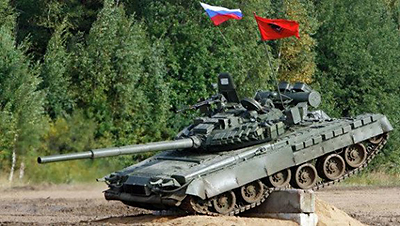 Rebel tanks draw up over against ATO forces in Troizke

A rebel tank platoon has demonstratively drawn up over against ATO forces in Troizke, Lugansk region, Head of Lugansk Regional State Administration, Gennady Moskal, reported on his official page on Monday.

According to him, a rebel tank platoon drew up against support points of Ukrainian troops from the side of rebel-held Kalynove at around 11.30 am, April 27. Hostilities are not going on in Troizke now, the governor said.

Also, he reported that rebels had attacked the town of Schastya with various types of weapons including AA mounts, grenade machine guns and machine-guns on Sunday from the side of Vesela Gora (a rebel-held settlement).

Apart from Schastya, military operations were conducted in a number of other settlements along the demarcation line. Explosions of shells in Bakhmutka, near the rebel-held village of Zholobok and our 29th checkpoint were heard in Krymske after 11 am.

Troitske (Popasna district near Debaltseve) was repeatedly attacked overnight with mortars and small arms. One of shells hit a farm causing minor damages to facilities.

The cease fire was observed in other flash points of the region, the administration announced.

Militants carry out attacks on ATO forces once again

Militants opened fire on Ukrainian positions 24 times in the period from 6 pm to 6 am, Saturday, the press center for the anti-terrorist operation said.

"A clash between Ukrainian military and rebel forces occurred near the settlement of Pisky. Ukrainian troops forced the enemy to retreat. Also, criminals carried out four attacks on positions of ATO troops near Pisky with 120-mm mortars. The same type of weapons was committed to action against Ukrainian forces near the villages of Granitne and Popasna, and close to Avdiyivka (two times)," the press center said in a statement.

"In Donetsk region, criminals launched 40 rockets between 1.10 am and 1.15 and 20 more shells between 2.10 and 2.20 on the positions of Ukrainian forces deployed near the village of Granitne. Rebels shelled civilians with Grad MLRSs for the second time during last week, namely they fired 20 rockets upon the settlement of Starognativka, Volnovakha district, in the period between 2.30 and 02.35 am," it said.

There were no attacks recorded in the Lugansk region, the press center added.

closer to the front

Militants form assault teams near Pisky, move gunnery spotters to forward positions, and continue to reposition forces including reconnaissance groups of Russian regular troops, the founder of the Information Resistance Group, Dmytro Tymchuk, reports with a reference to tactical data.

According to him, rebel groups are moved through Maksimove and Telmanove to the sector Chermalyk-Pavlopil-Shyrokine.

According to him, rebels also conduct regrouping in the area between Olenivka and Dokuchayevsk. 5 units of military hardware were observed moving from Dokuchayevsk in the north-west direction toward Stepne. A convoy of three trucks, one multi-purpose light-armoured towing vehicle and one armoured personnel carrier went in the same direction.

Militants continue to form an assault team in the area between the settlements of Krasnogorivka and Pisky.

According to Tymchuk, rebels also build up material and technical resources (such as ammunition, fuel, spare parts for military equipment) in this area.

1 Ukrainian service member was killed in the ATO area in the past 24 hours, an ATO spokesman, Olexander Motuzyanyk, said at a briefing on Monday.

General Staff: ATO forces are not to leave Shyrokine

as long as rebels fire

Ukrainian military will not leave the settlement of Shyrokine as long as rebels keep attacking it in breach of the "Minsk agreements," an ATO spokesman, Olexander Motuzyanyk, said at a briefing on Monday.

According to Motuzyanyk, Ukrainian troops are ready to implement the  demilitarization plan, which envisages a full armistice, withdrawal of both parties' troops to a specified distance, setting up web cameras, as well as mine clearing in the village and adjacent territories.

However, "this would be possible only if fire is ceased by illegal armed formations," the ATO spokesman stressed.

"Ukraine is not going to tolerate aggressive rebels' moves. The last OSCE report announced again that Russian mercenaries had carried out the largest provocations since the cease-fire deal was agreed. In particular, attacks near the village of Shyrokine lasted 12 hours. Militants once again put OSCE observers' lives at risk, as some shells hit the area, where an OSCE observation post was located," the ATO spokesman said.

In addition, according to him OSCE drones recorded 17 rebel tanks, 3 SP artillery units and 60APCs in the rebel-held territory near Shyrokine.