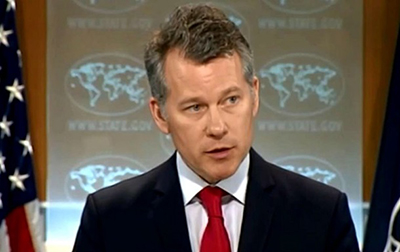 U.S. intelligence has observed the deployment of additional Russian air defence systems in Donbass, the spokesman for the State Department, Jeff Rathke, said at a briefing on Monday.

Rathke asserted that Russian military had moved up some air defence systems to the front line, according to some reports.

The State Department also said that it had been the largest build-up of this kind of Russian weapons in Ukraine since August of 2014.

Rathke also noted that both PRD and PRL fighters failed to withdraw artillery systems and multiple launch rocket systems from areas defined in the Minsk agreements. U.S. intelligence also reports on Russia increasing its military presence on the border with Ukraine.

22 attacks in the evening;

The situation in the area of the antiterrorist operation escalated once again on the evening of April 27 in Donbass.

Illegal paramilitaries carried out 22 attacks on positions of Ukrainian troops along the demarcation line in the period from 6 pm to midnight, the ATO press centre reports.

Outlawed units of gunmen attacked ATO forces with BM-21 Grad MLRSs near the town of Avdiivka, and shelled the inhabited settlement of Novolaspa, Volnovakha district, with MLRSs at 9 pm.

Moreover, rebels carried out two attacks on strongholds of ATO forces near Pisky and Opytne and one attack on army positions near Avdiivka and Chermalyk and checkpoints close to the town of Schastya.

Insurgents fired heavy artillery on positions of ATO forces near Avdiyivka twice and ones near Opytne and Chermalyk.

Poroshenko: Threats of war still hang over us

The threat of war still exists in Ukraine and new fighting could break out at any time, Ukrainian President Petro Poroshenko said at the International Conference in Support of Ukraine in Kyiv on Tuesday.

We still live under the threat of war, and it is the reality. The war may break out at any moment, but we are willing to do our utmost to avoid every doubt or retreat, he said.

"Thanks to your help and your unity, we will find a peaceful resolution to the situation in Donbass," Poroshenko said, when delivering his speech.

"The Minsk agreements aimed at resolving the situation in the east of the country should be fully implemented with the coordination role of Ukrainian partners," he stressed.

PRD rebels refused access for OSCE monitors to the village of Shyrokine near Mariupol yet another time on Monday, a statement on the OSCE page on Facebook reads.

"Yesterday, the so-called "PRD" did not allow a SMM team into the eastern part of Shyrokine for the third time in four days," a report reads.

In turn, Deputy Head of OSCE Mission to Ukraine Alexander Hug added that the PRD leadership had agreed free access for the mission, but a local rebel commander prevented monitors from accessing the eastern part of Shyrokine.

Hug reiterated that the SMM access to all Ukrainian areas was not a subject to negotiations and that preventing OSCE monitors from accessing the area contradicted the mandate, which was granted the SMM by 57 OSCE member-countries, including Ukraine and the Russian Federation.

One soldier died and 14 others were wounded in the past 24 hours in the ATO area, a spokesman for the Presidential Administration on ATO issues, Oleksandr Motuzyanyk, reported at a briefing.

Service members report that "Motorola's" gunmen attack both rebels and

A rebel unit under the command of a Russian gunman, Arseniy Pavlov, nicknamed "Motorola" has breached the ceasefire near Mariupol fighting against everyone as a third party, a spokesman for the "M" sector, Oleg Sushynsky, said as reported by the Mariupol website 0629. According to the spokesman, a PRD rebel unit under the command of "Motorola" has been stationed near Shyrokine, close to Mariupol, for about 10 days now.

Ukrainian military recorded a number of provocative activities of this armed group aimed at wrecking the peaceful process in Shyrokine.

The unit provokes fighting at the demarcation line by employing tactics of alternate attacks on army positions and PRD forces.