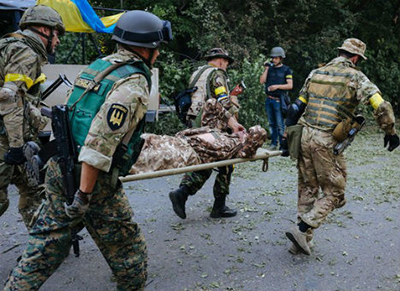 More than a hundred Ukrainian servicemen have perished in Donbass since the ceasefire deal was agreed, the speaker of the Verkhovna Rada of Ukraine, Volodymyr Groysman, announced during a speech at the European College in Natolin, Poland, on Wednesday, as reported by ZN.UA.

"Ukrainian positions have been attacked more than 2.5 thousand times since the armistice was announced on February 15, resulting in over 100 soldiers killed," Groysman said.

He also added that 500 service members had been wounded.

The speaker of the VR stressed that rebels did not allow OSCE observers to verify the withdrawal of large-calibre weapons and continue to commit them to action.

Additionally, he accused militants in refusing to exchange prisoners according to the formula "all for all".

Mr Groysman asserted that Russia continued to hold in captivity a number of Ukrainians, including an MP and PACE member, Nadiya Savchenko.

Rebels carried out 26 attacks on army positions in the period from 6 pm April 29 and midnight, the ATO press-centre reports.

Also, strongholds of Ukrainian military near Avdiyivka, Zaytsevo and Shyrokine were fired upon with 120-mm and 82-mm mortars.

Moreover, terrorists fired on ATO forces near Avdiyivka and Opytne with 122-mm artillery.

In the Lugansk region, outlawed units of gunmen shelled a Ukrainian checkpoint near Schastya three times with 82-mm mortars.

"As for the visit of Ban Ki-Moon, I think it would send an entirely wrong massage," Klimkin said at a press conference at the UN headquarters in New York. He went on to accuse Russia of violating the "key principles" of the UN Charter, as reported by the Ukrainian news broadcaster TSN.

According to Klimkin, the General Secretary plans a "number of visits to Poland, Ukraine and Moscow, to mark events of the Second World War."

"But, I hope that the Secretary General will not participate in the Moscow parade on May 9," Klimkin said.

The Russian Foreign Ministry confirmed on April 23 that Moscow expected UN Secretary-General Ban Ki-moon to participate in celebrations dedicated to the 70th anniversary of victory in the Second World War.

Militants continue to reposition military equipment including artillery and regular Russian forces to front lines, the founder of the Information Resistance Group, Dmytro Tymchuk, and reports with a reference to tactical data.

According to Tymchuk, Gorlivka militants received pecuniary rewards and bonuses. Such rewards were previously paid prior to fierce battles," he said.

"26 units of equipment were recorded repositioning mainly in southern sectors of rebel-held territories in the past 24 hours. Military vehicles were reported massing in a sector between Krasnodon and Krasny Luch; a great deal of traffic went through Snizhne and Amvrosiivka in the Starobeshevo and Donetsk directions," he informed.

Judges appointed by separatists have begun the procedure of pre-time discharge of individuals who, according to the Ukrainian law, serve sentences in Donetsk regional jails located in rebel-held territories," a statement reads.

Abroskin noted that some of the released inmates stayed in the PRD.

"It can be easily understood how those people will earn their living later on", Abroskin added implying that prisoners may join PRD forces.

Precision fire was delivered on a Ukrainian checkpoint near the town from the side of rebel-held Vesela Gora.

Grenades exploded close to a bridge over the Siversky Donets river and near the coach station. According to the preliminary information, no serviceman was hit.

The territory around this bridge was fired upon by rebels almost every day or even several times per day during the last week.

Apart from Schastya, military operations were conducted in a number of other settlements along the demarcation line. Fighting broke out between rebels and Ukrainian military on the outskirts of Krymske in the period between 6 pm and midnight.

Insurgents also attacked the village of Troizke, Popasna district, from the side of Kalynove after midnight.

A civilian - a 38-year-old Lugansk resident - got blown up by a mine near the town of Zolote.

"An important element of Russian operations was to drive a wedge between the EU and NATO. Anti-European and anti-American statements, largely released by Eurosceptics in EU member states, came to the forefront," a report of the security agency reads.

According to it, the main goal of the Russian special services was to discredit the position of Poland and other NATO member-countries regarding the Ukrainian crisis.

Polish special services also noted that Russia had been actively involved in implementing propaganda projects since the beginning of the conflict in Ukraine.

These are the projects that create a positive image of Russia while disparaging about opponents of Kremlin's policies.

In addition, according to the information provided by the agency, Russia carried out a lot of intelligence activities in the political, economic and scientific domains.

As reported earlier, Russian programmers hacked email archives of White House officials, as well as other people outside the U.S. presidential administration who regularly exchanged correspondence with the president.

Rebels carried out repeated attacks on Shyrokine on Thursday morning

PRD gunmen started firing mortars on the village of Shyrokine on Thursday morning, the Mariupol site 0629 reported with a reference to a spokesman for the sector "M", Dmytro Gorbunov.

Insurgents carried out 5 attacks on ATO positions in Shyrokine yesterday, two of which were conducted with 82- and 120-millimetre  mortars, and three others with machine-guns.

8 UAVs were observed flying over settlements in the sector "M", namely over the villages of Shevchenko, Peremoga, Lebedynske, Chernenko.

1 service member was killed and 4 others sustained wounds in the ATO area in the past 24 hours, a spokesman for the Ukrainian National Security and Defence Council, Andriy Lysenko, reported at a briefing on Thursday.