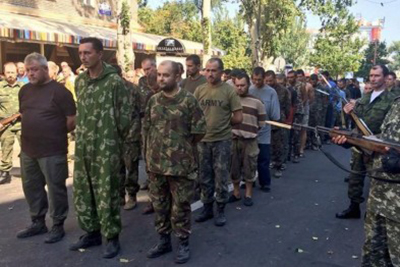 Volunteer: Around one thousand people in rebel captivity

According to estimates by Ukrainian volunteers, about one thousand people are still held in rebels' captivity, a volunteer, Viktor Maystrenko, announced during a live radio broadcast of "Hromadske Radio".

The volunteer added that he meant both servicemen and civilians.

"Both servicemen, and civilians, which are held in captivity at the moment, are Ukrainian citizens. It is important for the Ministry of Defence, Security Service of Ukraine, for every volunteer to get them all - military, volunteers, and civilians - released from captivity, Maystrenko said.

He has been dealing with this matter for over a year now.

"Those lists formed in Ukraine are no more than wishful thinking, for they are later changed by rebels that decide who they want to release," the volunteer said.

The situation in the ATO area remained tense on the evening of May 4, as terrorists breached the ceasefire 27 times in the period between 6 pm and midnight, the ATO press-centre reports.

Criminals carried out a number of attacks on our strongholds with 122-mm artillery and tanks near Shyrokine, and shelled Ukrainian troops near the settlements of Opytne, Pisky, Granitne, and Avdiyivka with grenade machine guns, grenade launchers, as well as fired machine-guns.

In the Lugansk area, the enemy fired 82-mm mortars on our positions near the settlement of Syze.

An armed clash between Ukrainian military and a rebel group occurred close to the settlement of Zolote at 5.30 pm and lasted almost 2 hours. Our soldiers repelled enemy attacks and drove terrorists back.

No attacks on inhabited settlements were recorded in the above mentioned period.

Shyrokine under rebel fire for over 12 hours

Positions of ATO forces near Shyrokine have been attacked for over 12 hours, the press-centre of the Donbas battalion reports on its Facebook wall.

"Our positions in Shyrokine have been under fire for 12 hours. Positions of the Donbas battalion situated near the local beach were attacked with a tank yesterday evening. Battles are raging there now," a post reads.

“No losses have been reported on our part so far," it says.

PRL leadership announced on Tuesday it had introduced martial law in rebel-held territories of Ukraine, according to a report of the Ukrainian broadcaster “Hromadske Radio”.

According to documents, the measure is aimed at creating conditions to prevent or repel "aggression" against the PRL, Hromadske Radio reports.

Aggression in their interpretation is the application of armed forces by a foreign state (a group of states) against the sovereignty, political independence and territorial integrity of the People's Republic of Lugansk […] inconsistent with the UN Charter, the document states.

It also says that "some limits may be imposed in the period of martial law to ensure national defence and state security […]."

Insurgents asserted martial law was to come into effect on the date and at the time stipulated by the decree of the leader of the PRL rebel organization. According to the document it starts to apply on May 5.

ATO press-centre reports there are no volunteer battalions

deployed in the area of military operations

"Several media have recently published information about an alleged involvement of volunteer units in the ATO,” the press centre said in a statement.

“The press centre of the ATO Headquarters would like to announce officially that there are no volunteer battalions in the area of anti-terrorist operation […].

“Military operations in the ATO zone are carried out solely by the Armed Forces of Ukraine, military and law enforcement units and other counterinsurgency entities aimed at preventing and combating terrorism,” the statement reads.

No servicemen were killed, but three Ukrainian soldiers sustained wounds in the ATO area in the past 24 hours, a spokesman for the Ukrainian National Security and Defence Council, MP Andriy Lysenko, reported at a briefing.

He notes that the situation in the ATO area has become stable over the past 24 hours, as the enemy decreased the number of armed provocations against Ukrainian troops.

"However, the Minsk agreements are further violated by rebels: our positions were shelled 17 times with 120-mm mortars, 6 times with 122-mm cannons, and twice with tanks yesterday. In the Mariupol direction, the settlement of Shyrokine is a remaining flash point of the conflict between government forces and rebels.

Insurgents were especially active near the Donetsk airport and on the western outskirts of Gorlivka.

In the Lugansk direction, an armed clash between ATO forces and rebels occurred near Zolote.