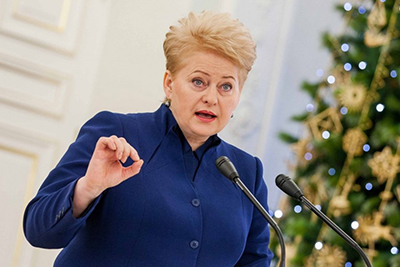 Grybauskaite: There is no ceasefire in Ukraine

Russian Foreign Minister Sergei Lavrov accused "someone in the European Union" on Tuesday of trying to ensure a ceasefire in eastern Ukraine does not hold.

Pro-Russian separatists and the Ukrainian government agreed the truce in the Belarussian capital Minsk on Feb. 12, but it has failed to end all fighting and the Lithuanian president told Reuters it was now all but dead.

Lavrov deflected the blame on to Kiev at a news conference in Moscow and accused the EU of turning a blind eye to attacks which have killed civilians in rebel-held areas.

"Judging by certain signs, someone in the European Union wants the EU to allow the Ukrainian government not to implement the Minsk agreements," he said after talks with Austrian Foreign Minister Sebastian Kurz.

He gave no more details but also described what he called increased military activity by Ukrainian forces in recent weeks as an attempt to tear up the ceasefire accord.

The EU did not immediately respond to Lavrov's remarks but has regularly urged all sides to implement the Minsk deal and underlined Moscow's responsibilities in particular.

Most EU leaders say they hope the ceasefire can be shored up but Lithuanian President Dalia Grybauskaite said: "The ceasefire no longer exists."

"The situation is changing of course every day, but we are relying on NATO information, and NATO information is such that, really, the Minsk agreement is over," she said in an interview in the Lithuanian capital Vilnius.

Kiev and the West accuse Moscow of sending arms and troops to help the separatists in fighting which has killed more than 6,100 people in just over a year.

Russia denies the accusations and says the West instigated the overthrow of a Moscow-backed Ukrainian president last year as part of efforts to reduce Russian influence in the region.

Under the Minsk deal, weapons bigger than 100 mm calibre, including large artillery, heavy mortar and powerful rocket systems, should have been withdrawn from the frontline.

In Kiev, Ukrainian military spokesman Andriy Lysenko said the separatists were building up military equipment for more attacks. A rebel leader, Andrei Purgin, said this was a "political declaration for the Western public."

Situation in the ATO area escalates;

The situation in the ATO area escalated once again on the evening of May 5, the press service of the ATO Headquarters reports on Facebook.

"Illegal armed forces breached the ceasefire 42 times in the period from 6 pm to midnight; moreover, the enemy committed to action heavy armaments," the headquarters stressed.

Also, rebels carried out two attacks on Ukrainian positions near the village of Shyrokine with 122-mm artillery. Separatists fired the same weapons on Ukrainian strongholds near the settlements of Opytne and Vodyane.

Ukrainian positions near the villages of Opytne, Pivnichne, Granitne, Shyrokine, and Pisky were shelled with 120-mm mortars; Ukrainian troops deployed near Kirovo were attacked by rebels with tanks, mortars, and machine-guns.

The most intense attacks on Ukrainian positions were reported in the town of Stanyzia Luganska, Lugansk region, where rebels committed AA mounts, grenade machine guns, and machine-guns.

"Insurgents repeatedly attacked inhabited settlements. The eastern part of Chermalyk was mortared in the period between 10.30 pm and 10.50 pm; gunmen fired 82-mm mortars in the direction of Leninske from 11 to 11.30 pm," the headquarters added.

In addition, Ukrainian units recorded 12 UAVs spying over the southern part of Donetsk region during the mentioned period.

IRG: up to 3 thousand gunmen near Novoazovsk

Militants have reinforced units stationed in areas between Svetlodarsk and Artemivsk, near Gorlovka, as well as to the north of Lugansk; there are up to 3 thousand soldiers massed near Mariupol, the head of the Information Resistance Group, Dmytro Tymchuk, reports.

According to him rebel units deployed to the north of Lugansk continue to be reinforced.

"70 insurgents and 3 Grad MLRSs were spotted moving to join these formations in the past 24 hours. (They arrived in the area of Vesela Gora). The left flank of PRL forces was also reinforced. In particular, 6 units of military hardware including 3 tanks were repositioned from Bryanka to Pervomaysk," he said.

Forces and supplies of Russian and terrorist forces were transferred through Makiyivka to areas near Yenakiyevo and Gorlivka.

Also, according to him, rebel units deployed to the north of Novoazovsk were reinforced and supplied through Telmanove.

"Insurgents have virtually formed a powerful striking force in the Mariupol direction, which includes several scores of military hardware and around 3000 gunmen," he informed.

Rebels have committed howitzers "GVOZDIKA" and "ACACIA", when attacking ATO positions near the Donetsk airport; sabotage and reconnaissance groups have made a number of attempts to infiltrate, the head of the Information Resistance Group, Dmytro Tymchuk, reports.

"An especially tense situation was near Opytne and Pisky. Rebels carried out numerous attacks on positions of ATO forces in this area with SP artillery, 122-mm 2C1 "GVOZDIKAs" and 152-mm 2C3 "ACACIAs".

Also, rebels fired 120-mm mortars on ATO forces stationed near Opytne and Pisky, as well as Avdiyivka and Berdyanske.

They repeatedly committed to action heavy armaments near Avdiyivka in the past 24 hours.

5 soldiers killed, and 12 wounded in the past 24 hours

5 soldiers killed and 12 others wounded in the past 24 hours in the ATO area, a spokesman for the Ukrainian National Security and Defence Council, Andriy Lysenko, reported at a briefing.

The Colonel specified that the Ukrainian army suffered the major casualties near Avdiyivka, where an armoured personnel carrier of the Defence Ministry was blown up by a landmine.

He also noted that the situation had significantly deteriorated in the past 24 hours; the intensity of fighting had not decreased.

According to the State Border Service, 17 enemy UAVs were spotted spying over the ATO area on Tuesday.