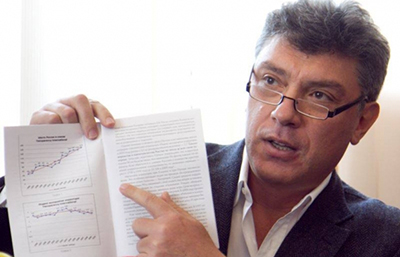 At least 220 Russian servicemen returned to Russia in coffins after two waves of massive losses among Russian military in Donbass, according to the report "Putin. War", received by "Ukrayinska Pravda".

The report was prepared by colleagues of the murdered member of the Russian opposition, Boris Nemtsov, on the base of materials collected by him.

In early February, representatives of the relatives of Russian soldiers killed in Donbass got in touch with Nemtsov. The report reads they were seeking help to receive compensations from the Ministry of Defence. They also spoke about massive losses Russian military suffered during hostilities near Ilovaysk and in the course of winter battles for Debaltseve. According to Nemtsov, about 70 Russian servicemen were killed in Debaltseve, 17 of whom were paratroopers from Ivanovo. All Russian soldiers had to officially resign from the Russian armed forces at the request of their commanders before being sent to Donbass, the sources told.

At least 150 Russian soldiers were killed in August 2014, according to Nemtsov’s estimates. The Ukrainian army was on the offensive at that time, but was stemmed by Russian troops near Ilovaysk. The relatives of perished Russians received 2 million roubles in return for a written promise not to disclose the circumstances of their relatives’ deaths.

According to Nemtsov, about 70 Russian soldiers including at least 17 paratroopers from Ivanovo died in January and February 2015 near the town of Debaltseve. The representatives of servicemen’s relatives asked Nemtsov to help in February, because they could not get compensations. The report reads that Russian soldiers deployed to Donbass were dismissed from the army at that time, and sent into combat as volunteers. The Russian Defence Ministry promised to pay compensations in the case of deaths or injuries, even though the soldiers were dismissed. However, this promise has never been fulfilled.

Relatives were afraid to speak in public, for they had signed nondisclosure agreements. Nemtsov was informed by his sources that soldiers’ relatives were threatened with criminal prosecution the same way as a mother of many children, Svetlana Davydova, was convicted of treason in favour of Ukraine.

Nemtsov’s murder has convinced the relatives to give up their claims. "If Nemtsov can be shot dead near the Kremlin, then we can’t do anything for our clients in Ivanovo," the authors of the report resumes.

Speaking on the phone, Mr Ban Ki-moon informed Poroshenko about the results of his visit to Moscow, where he discussed the establishment of a UN Office to support the Minsk peace agreements.

Poroshenko stressed the necessity of the full implementation of the Minsk agreements, according to which an armistice had been due to come into effect on February 15.

However, the ceasefire has never been fully implemented.

Moreover, Poroshenko and Mr Ki-moon agreed to continue to do everything possible in order to free a Ukrainian pilot and MP, Nadia Savchenko, from captivity in Russia.

Ministry of Defence: Rebels have in arsenal 4 "Tochka-U" systems and 190 tanks

9 thousand Russian military have been deployed to the occupied territories of Donetsk and Lugansk regions, Chief Inspector for Humanitarian and Social Support of the Ministry of Defence Valentyn Fedichev reported.

According to him, there are over 40 thousand gunmen in the occupied territory of Donbass.

He also added that rebels had had in service 4 operational and tactical missiles "Tochka-U" (SS-21 Scarab A according to the NATO classification) since the summer of 2014.

Apart from that, according to Fedichev, rebels have in arsenal about 190 tanks, with the total number of available tanks reaching 700 units.

The situation in eastern Ukraine remains tense without significant changes, as rebels resumed attacks on ATO forces with banned weapons at 6 pm May 11, the press service of the ATO Headquarters reported on Facebook.

In the Donetsk direction, insurgents shelled Opytne, Vodyane, and Pisky with 120-mm mortars. The Butkivka mine was fired upon with an AA mount and a tank.

Also, 152-mm rebel shells hit the settlement of Avdiyivka. Maryinka was attacked by a sniper.

In the Mariupol direction, criminals committed to action self-propelled artillery weapons, and fired 120- and 82-mm mortars, grenade launchers and machine-guns.

Furthermore, according to the information provided by the ATO Headquarters, a group of 10 professionally trained snipers is due to come to Donetsk from Russia on May 12.

Rebels set up a number of platoon strongpoints to the east of Stakhanov, near Frunze and Donetske, the head of the Information Resistance Group, Dmytro Tymchuk, posted on Facebook on the morning of May 12.

"None of the equipment and weaponry brought to Donetsk by rebels for parading on May 9 has been withdrawn from the city," Tymchuk said.

According to him, a large number of rebel armoured vehicles were concentrated in the Petrovsky and Kuibyshev districts of the Donetsk city, mainly near the village of Krasnogorivka.

Ukrainian President Petro Poroshenko announced on April 30 that there were signs rebels may begin a new offensive against Ukrainian forces in mid-May, while NATO Secretary General Jens Stoltenberg asserted on Monday insurgents were capable to launch an attack on Ukraine on a short notice.

The OSCE said earlier that rebels breached the Minsk ceasefire deal by moving up their tanks and other heavy weaponry to Donetsk.

The Dnipro battalion recently released a footage recorded by a drone, which shows a large number of tanks, APCs and other military equipment gathered in Donetsk.

General Staff: 3 service members killed and 1 wounded in the ATO area in the past 24 hours

3 Ukrainian military died, and 1 soldier was wounded in the area of the anti-terrorist operation in the past 24 hours, a spokesman for the Ukrainian National Security and Defence Council, Andriy Lysenko, reported at a briefing on Tuesday.

"We lost three soldiers, and one was wounded as a result of fierce hostilities,” he said.

According to Lysenko, ATO troops suffered losses near Donetsk and the town of Schastya in the Lugansk region.

As reported earlier, Head of the Ministry of Foreign Affairs Pavlo Klimkin announced on Tuesday that three Ukrainian service members were killed in Donbas on May 11. Kyiv reports about constant violations of the ceasefire initiated by militants.