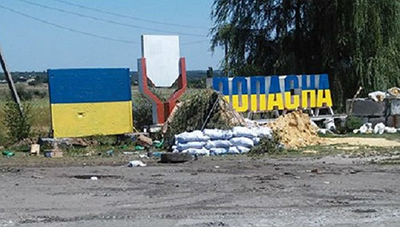 Moskal speaks about the tragedy in Popasna: 2 military and 2 volunteers killed

According to ascertained data, two servicemen and two volunteers from the Lviv region were killed as a result of the land mine explosion near Popasna on May 17.

According to sources, a military vehicle UAZ Hunter was blown up by a mine on a dirt road near Popasna very close to the demarcation line on Sunday at about 11.20 am. The road may have been mined by a rebel sabotage and reconnaissance group the night before.

Militants fire in the Donetsk direction;

an armed clash reported in Novomychailivka

Militants continued to bombard army positions and inhabited settlements on the evening of May 17, the press service of the ATO Headquarters reported on Facebook.

An armed clash occurred near Novomychailivka.

Rebels machine-gunned the settlement of Leninske in the Artemivsk direction.

2 soldiers died and 4 others were wounded in the past 24 hours in the ATO area, a spokesman for the Ukrainian National Security and Defence Council, Andriy Lysenko, reported at a briefing.

terrorist attacks in the Lugansk region

Head of the SSU Valentyn Nalyvaychenko talks of close involvement of two Russian military captured earlier in terrorist attacks in the Lugansk region as reported by Ukrainski Novyny with a reference to his speech at a briefing.

According to him, two Russian servicemen possessed weapons and were part of a Russian terrorist group which carried out terrorist attacks in the Lugansk region targeting civilians and ATO forces.

One soldier served in the grade of captain and the other one in the grade of sergeant; both men were assigned to a military unit of the Tolyatti main intelligence directorate of the Russian General Staff.

"They were deployed to Ukraine to carry out terrorist attacks," Nalyvaychenko said.

He also added that this particular terrorist group had killed an ATO soldier.

As reported earlier, the ATO headquarters announced about capturing 2 Russian servicemen in the ATO area. They were taken prisoner when fighting as a sabotage and reconnaissance group to seize a strategic bridge near Schastya.