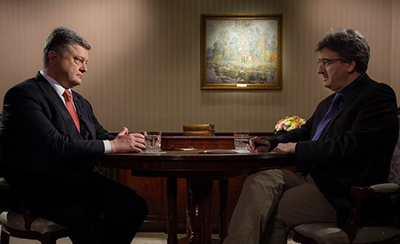 A total of 1,800 Ukrainian soldiers and 7,000 civilians have been killed since the outbreak of the Donbass military conflict, Ukrainian President Petro Poroshenko said in an interview with the BBC Ukraine on Tuesday.

According to Poroshenko, the situation in the Donbas conflict zone has recently deteriorated significantly.

"When we were on the Maidan [Square], we did not expect our country to be involved in such a great war," he said.

"You have to understand, what kind of price Ukraine is paying for this and that is $5 to $10 million daily. This is a huge price for our country. But nearly 9,000 lives are even a greater price for us," Poroshenko said.

The head of the Czech Foreign Ministry calls on Russia

to stop playing hide and seek

"It would be good to finally stop playing hide and seek," Zaorálek  told as reported by the German news broadcaster Deutsche Welle.

Any so-called hybrid war, when soldiers fight without insignia, would  reach stalemate, German news agency DPA reported with a reference to the Czech Foreign Ministry.

In turn, Klimkin reassured his counterpart that the two Russian soldiers captured by Ukrainian forces on May 17 near Lugansk were humanely  treated.

The Ukrainian government accused the soldiers of fighting on the part of pro-Russian rebels in eastern Ukraine, and asserted they would be prosecuted as terrorists.

According to the Ukrainian law, the soldiers may face life imprisonment if found guilty of terrorist activities.

Moscow denies the fact that the captured soldiers belong to the Russian Armed Forces regardless of statements made by the Ukrainian authorities and the soldiers themselves.

IRG: The situation in Donbass escalating, particularly in the Artemivsk direction

Rebels sharply intensified their activity in Donbass over the past 24 hours, the head of the Information Resistance Group, Dmytro Tymchuk, posted on Facebook on the morning of May 20.

The number of fire attacks on ATO positions increased, as illegal paramilitaries made numerous attempts to breach the defensive line of Ukrainian troops.

"Russian troops and terrorists fired 152- and 122-mm artillery systems, as well as 82- and 120-mm mortars. They committed tanks and armoured vehicles, and fired all kinds and types of light and heavy infantry weapons," Tymchuk wrote.

"The situation in the Artemivsk direction is also deteriorating. Positions of Ukrainian troops in Shyroka Balka, Luganske, Zolote, Katerynivka and Svitlodarsk came under rebel fire in the past 24 hours," he reports.

The situation is becoming progressively worse in the area between the settlements of Popasna and Orikhove.

"Army positions and Ukrainian strongholds situated along the border of this area, including those in the town of Popasna and the village of Katerynivka were fiercely attacked by terrorists," Tymchuk wrote.

According to the IRG, Russian and terrorist forces became more active near Granitne, Novogrygorivka, and Starognativka.

"Positions of Ukrainian troops were repeatedly shelled with 82- and 120-millimetre mortars, as well as with ZU-23-2. One of the strongholds of ATO forces was attacked by 4 ICVs near Tryokhizbenka and Sokolnyky," Tymchuk said.

"Rebel assaults and fighting were reported near Avdiyivka, Krasnogorivka, Pisky and Maryinka. A sudden increase in the number of sniper attacks was recorded in several areas simultaneously," he added.

"OSCE observers continue to report attacks on peaceful towns and villages carried out by pro-Russian separatists and make their utmost to prevent them. That is what happened in the village of Pisky at around 1 am on May 19. There are almost no local residents left in the village, only Ukrainian soldiers. Insurgents fought employing the "scorched earth" tactics. They fired on residential quarters with incendiary (presumably phosphorus) ammunitions this time," a statement reads.

to protect itself against Russia's nuclear weapons

Ukraine is seeking for opportunities to defend itself against Russia's nuclear weapons deployed to the Crimea and may ask its international partners to deploy  ABM defence systems to its territory, NSDC Secretary Oleksandr Turchynov said in an interview with "Ukrinform".

He asserted that Russia had already redeployed 10 units of tactical ballistic missile systems "Iskander-M" to the Crimea", which had been placed near the villages of Scholkine (the Kazantip Cape) and Kranoperekopska".

It is not enough just to have Ukraine’s efforts to confront the madman threatening the world with Russia’s powerful nuclear potential. “We need cooperation and systematic coordination by all world countries. It should be a set of economic, political, and military measures […]. And I would not rule out talks on the deployment of antimissile defence systems to Ukraine," Turchynov said.

Rebels fired on four inhabited settlements in the Lugansk region: military and civilians were wounded as a result, Chairman of the Lugansk Regional State Administration Gennady Moskal reported on his webpage on Wednesday.

According to him, apart from the clash in Katerynivka, where a number of servicemen were killed and wounded, other operations were conducted in several localities along the demarcation line in the Lugansk region throughout the evening of May 19 and overnight.

Stanyzia Luganska and its outskirts were mortared at night. A reconnaissance-subversive rebel group attacked army positions in Tryokhizbenka with grenade machine guns from the right bank of the Siversky Donets after 7 pm. A 25-year-old soldier was wounded as a result of shelling.

The town of Schastya was attacked again from separatists' positions in rebel-held settlement of Vesela Gora with grenade launchers and mortars.

3 service members killed, and 9 others wounded in the last 24 hours

3 soldiers died and 9 others were wounded in the past 24 hours in the ATO area, a spokesman for the Ukrainian National Security and Defence Council, Andriy Lysenko, reported at a briefing.

Furthermore, Lysenko said that all casualties were reported as results of the clash between Ukrainian forces and rebels near the village of Katerynivka in the Popasna district of the Lugansk region.

He also announced that three rebel drones were reported spying over the ATO area in the past 24 hours.

Lavrov: PRD and PRL have to be part of Ukraine

"We have been saying at all levels via Russian president's statements, as well as in other formats, that we advocate [both republics] to remain part of Ukraine," Russian Foreign Minister Sergei Lavrov said in an interview with Rossiiskaya Gazeta.

"They [the two republics] have proposed their own draft constitution. It says about the status mentioned in the Minsk agreement, namely the republics are part of Ukraine. And a constitutional reform should perpetuate this status," he stressed.

According to Lavrov, this was inked personally by German Chancellor Angela Merkel and French President Francois Hollande in Minsk.

As reported earlier, Lavrov said Ukraine had to take into account the status of Donetsk and Lugansk when introducing a constitutional reform.

Despite of an ephemeral change in the Russian present rhetoric in favour of Ukraine, the Russian authority do insist that all Ukrainian activities should be coordinated with the Donbas leaders of pro-Russian rebel groups.