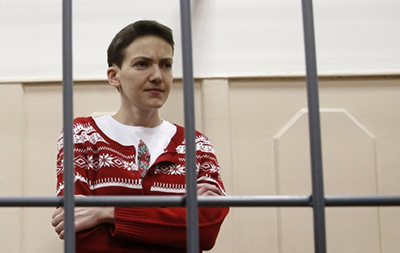 The Russian Investigative Committee has officially finished its inquiry regarding a Ukrainian pilot and MP, Nadiya Savchenko, the Russian Interfax news agency reported with a reference to Savchenko's lawyer Mark Feigin.

"The preliminary investigation has been completed, the next step would be the familiarization with materials of the case,” he said.

According to the lawyer it may take about one and a half month for the court to familiarize with materials of the case, so everything should be done by the second half of July.

Rebels switch from the Donetsk to Artemivsk direction

The activity of Donbas pro-Russian rebels is shifting from the Donetsk to Artemivsk direction, the head of the Information Resistance Group, Dmytro Tymchuk, posted on Facebook on the morning of May 21.

Army positions were also fired upon near Opytne and Vodyane.

In the Mariupol direction, rebels carried out intense attacks on positions of ATO forces to the east and north of Shyrokine with machine-guns, mortars and military hardware.

27th humanitarian convoy from Russia: over a hundred trucks heading to Donetsk and Lugansk

Columns of the Russian Emergency Ministry reportedly carrying humanitarian aid for Donbass have crossed the state border. One of them is heading to Donetsk, and the other one to Lugansk, TASS reports.

According to the Russian Emergency Ministry, over 100 trucks are delivering more than one thousand tons of humanitarian cargo sent for residents of the Donetsk and Lugansk regions, namely living essentials and food badly needed in Donbas.

It is the 27th REM convoy that has entered into Ukraine during the Donbas crisis.

General Staff: 1 service member killed and 8 others wounded in the ATO area

1 service member was killed and 8 others sustained wounds in the ATO area in the past 24 hours, a spokesman for the Presidential Administration on ATO issues, Oleksandr Motuzyanyk, reported at a briefing on Thursday.

According to him, ATO forces suffered losses mainly during hostilities in the Svitlodarsk defence sector.