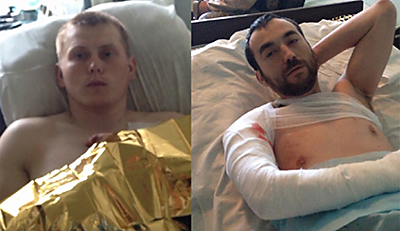 Captured Russian soldier Alexandr Alexandrov says he did not leave the service, and was executing a given command, according to his statement announced during an interview with the Russian newspaper "Novaya Gazeta".

He also confirmed the presence of the Russian army in Donbass.

Aleksandrov said that he would like to have the status of a prisoner of war, for he was ordered to go to Donbass.

"I wish I were a prisoner of war. I like this status more than the status of a mercenary or a bandit. I was ordered to go to Donbass, and being a soldier I had to execute it. I was on a mission there," he said.

Furthermore, Aleksandrov said when commenting on the statement of the Russian authority regarding no Russian soldiers in Donbas: "As you can see, it [the Russian army] is there. It is just awkward for the Kremlin to admit this."

However, the other captured Russian soldier, Yevgeny Yerofeyev, has denied the fact that Russian servicemen are present in Donbass.

"They have managed to capture two people and want to say it’s the whole army," Yerofeyev said.

resulting in one serviceman wounded

Rebels mortared Stanyzia Luganska several times in the period between 10 pm and midnight, the press service of the Lugansk region governor, Gennadiy Moskal, reports on his page.

According to Moskal, a subversive rebel group engaged in combat with Ukrainian law enforcement units at midnight, after having crossed an almost ruined bridge over the Siversky Donets and infiltrated in the government-held territory of Donbass.

Ukraine and EU sign an agreement for 1.8 billion Euros

The European Commission and the Ukrainian government have signed a memorandum of understanding on the provision of macro-financial assistance worth EUR 1.8 billion.

Ukraine is to receive the first tranche of 600 million Euro at the beginning of this summer.

capable of launching a nuclear strike

Russia has deployed equipment during the conflict in eastern Ukraine that can be used for nuclear weapons, NATO’s top military commander said.

While there’s no “direct evidence” that the Kremlin has made deployments of nuclear arms, U.S. Air Force General Philip Breedlove said on Thursday, “that does not mean that they may not have happened.”

“Lots of the systems that the Russians use to deliver nuclear weapons are dual-use systems -- they can be either conventional or nuclear -- and some of those systems are deployed,” Breedlove said.

Violence has continued in Ukraine’s easternmost regions despite a cease-fire agreed to in February, with NATO accusing Russian President Vladimir Putin of deliberately destabilizing the area following Russia’s annexation of the Crimea last year.

The North Atlantic Treaty Organization said last week that it was “deeply concerned” about Russia’s statements about possible stationing of nuclear weapons and their delivery systems in Crimea. Putin told a documentary film aired on Russian television two months ago that he was ready to put his country’s nuclear forces on alert when he annexed the Crimean peninsula in March 2014.

Overwhelming evidence of ongoing war crimes, including torture and summary killings of prisoners, serve as a stark reminder of the brutal practices being committed on a near-daily basis in the conflict in eastern Ukraine, Amnesty International said in a new report published today.

The 36-page report - Breaking Bodies: Torture and summary killings in eastern Ukraine - provides compelling evidence of frequent and widespread prisoner abuse by a broad range of captors on both sides of the conflict.

Former prisoners described being beaten until their bones broke, tortured with electric shocks, kicked, stabbed, hung from the ceiling, deprived of sleep for days, threatened with death, denied urgent medical care and subjected to mock executions.

Amnesty has also identified at least three recent incidents where separatist fighters summarily killed at least eight pro-Kiev fighters. This is based on eyewitness testimony, hospital records, evidence posted on social networks and media reports. In an interview with a journalist, one separatist armed group leader openly admitted to killing captive Ukrainian soldiers, which is a war crime.

Amnesty is calling on relevant UN agencies and experts to undertake an urgent mission to Ukraine to visit all detention sites for prisoners held in connection with the conflict – including unofficial places of detention. Those that should take part include the Subcommittee on Prevention of Torture and other Cruel, Inhuman or Degrading Treatment or Punishment, the Working Groups on arbitrary detention and enforced disappearances, and the Special Rapporteur on torture.

Moskal: Schastya under fierce attack; one APC disabled and a soldier wounded

The town of Schastya was shelled with mortars and grenade launchers on the evening of May 21 and overnight, Moskal said.

According to a report of Head of the Lugansk Regional State Administration Gennady Moskal, the attack was launched from rebel positions in the occupied settlement of Vesela Gora aiming at Ukrainian strongholds situated near a bridge across the Siversky Donets.

According to preliminary data, at least one armoured personnel carrier was disabled and one servicemen sustained wounds.

3 military were killed, and 12 others wounded in the area of the anti-terrorist operation in the past 24 hours, a spokesman for the Ukrainian National Security and Defence Council, Andriy Lysenko, reported at a briefing on Friday.

He also said that the settlement of Shyrokine remains the only point of confrontation in the Mariupol direction. The enemy committed there various types of weapons ranging from machine-guns to 122-mm cannons.

The situation in the Donetsk direction remains most difficult. Fighting significantly intensified on the western outskirts of the city of Donetsk on Thursday.

"Apart from attacks on positions of ATO forces, PRD terrorists fired 122-mm cannons on resident quarters of Avdiyivka, Opytne, and Vodyane. Several casualties were reported among civilians, namely one person was killed, and 2 others sustained shrapnel wounds, he said.

Moreover, a number of gun battles were reported near Zolote, Schastya, and Stanyzia Luganska in the Lugansk direction.