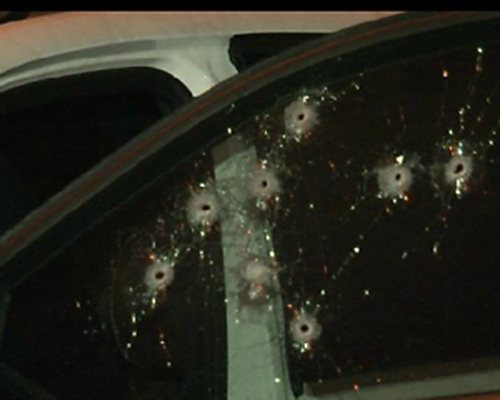 Rebels firing at an ambulance in the Lugansk region; casualties reported

Pro-Russian rebels shot at an UAZ military ambulance near Stanytsia Luganska on Monday, killing one soldier as a result, the press centre of the Head of the Lugansk Regional State Administration, Gennady Moskal, reported.

The attack occurred in the government-held territory near the border with Russia, the press service reported.

The ambulance with two service members was heading from Komyshne to Syze when it came under rebel fire, leaving one soldier (a 46-year-old man) killed and another one seriously wounded.

“They lay mines, which have already blown up two military vehicles, and carry out other activities. Yesterday they attacked an ambulance, even though the car had special signs on it."

Sweden’s defence forces have demonstrated their readiness and do have a plan for action in case of possible Russian aggression, Swedish Prime Minister Stefan Leuven said as reported by the news agency RBK-Ukraine.

"The defence forces always have a plan of action at their disposal in case Russia carries out provocative activities in the air. It depends on the situation. This is only drilling, and we believe that our defence capability stands ready and we have a plan of action in case of possible Russian aggression," Leuven said.

According to the prime minister, Sweden has to build up its military power, and participating in these sorts of drills should help the country improve the readiness to repel possible aggression.

The Arctic Challenge Exercise 2015 is a nine-nation air-defence drill organised by Norway, Sweden, and Finland.

relatively peaceful in the Mariupol area

Gunmen continued to attack Ukrainian positions in all directions on the evening of May 25 and overnight, the ATO press service reported on Facebook.

In the Donetsk direction, terrorists fired mortars, artillery, machine-guns, grenade launchers on the settlements of Opytne, Pisky, Krasnogorivka, Novomychailivka, Vodyane, Avdiyivka, and the Butivka mine.

In the Lugansk direction, criminals bombarded the village of Syze three times in the past 24 hours.

The settlements of Zhovte, Schastya, and Stary Aidar were attacked with grenade launchers, mortars, and heavy machine-guns.

In the Artemivsk direction, insurgents carried out attacks on Kirovo with grenade launchers, heavy machine-guns and small arms.

The villages of Shyrokine and Myrne were assaulted with mortars, grenade launchers, and machine-guns.

Rebels' unmanned aerial vehicles were observed near Shyrokine and Mangush.

IRG: 10 tanks and around 250 rebels arrive in Yasynuvata

The arrival of new equipment and personnel, namely 10 tanks, 15 military vehicles and approximately 250 militants was recorded in Yasynuvata, the founder of the Information Resistance Group, Dmytro Tymchuk, posted on Facebook.

He also added that two TOR-M1 anti-aircraft weapon systems were spotted in an area to the south of Makiyivka.

The heaviest military traffic was reported in the cities of Donetsk, and Lugansk, as well as on their outskirts.

The route Torez-Gorlivka through Shakhtarsk was also very busy.

NATO Secretary General: We have lots of evidence proving the presence of Russian troops in Donbass

NATO has a lot of information at its disposal proving the presence of Russian troops in Donbas, NATO Secretary General Jens Stoltenberg said in an interview with Novaya Gazeta.

"The evidence comes one after another, including facts based on data provided by our intelligence. A lot of photos have already been published. But if people do not believe us and our words, they could read media releases, both Russian and foreign," Stoltenberg asserted.

Today’s Russian stand reminds me of the situation when the Russian government tried to deny it had deployed troops to the Crimea. They sent soldiers there in uniforms with no insignia, and said those were no Russian servicemen. It was only after they annexed the Crimea that they admitted their military participation, Stoltenberg said.

According to Stoltenberg, NATO has all sorts of intelligence data proving Russia's military presence in eastern Ukraine.

General Staff: 1 service member killed and 12 others wounded in the ATO area in the past 24 hours

1 service member was killed and 12 others sustained wounds in the ATO area in the past 24 hours, a spokesman for the Presidential Administration on ATO issues reported on Tuesday.

According to him, ATO forces suffered the biggest losses near Pervomaysk in the Lugansk region.

Also, 25 enemy UAVs were observed over the ATO area in the past 24 hours.