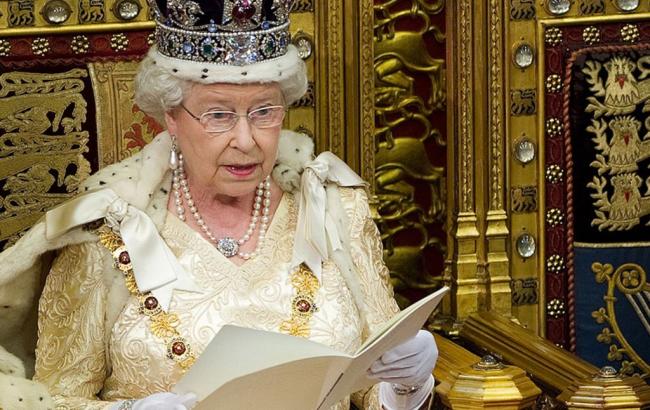 The Queen Elizabeth: Britain will maintain pressure on the Russian Federation

Great Britain will maintain pressure on Russia aiming at the full implementation of the Minsk agreements.

The Queen Elizabeth II said when delivering her speech to both Houses of Parliament at the State Opening of Parliament 2015, The Telegraph reported.

"My government will maintain pressure on Russia to respect the territorial integrity and sovereignty of Ukraine, and will insist on the full implementation of the Minsk agreements," the Queen asserted.

Furthermore, she stated that her government would continue to play a leading role in global affairs, and remain at the forefront of the NATO alliance and of international efforts to degrade and ultimately defeat terrorism in the Middle East.

Also Elizabeth II promised that early legislation would be introduced to provide for an in-out referendum on membership of the European Union before the end of 2017.

Two volunteers of the Aidar battalion were killed on May 22 and 26 while on a mission, the press service of the battalion posted on Facebook on Tuesday.

"A fighter of Aidar battalion’s second Afghan assault company, who lived in the town of Schastya, Oleksiy Hashchenko, 50, was killed on May 22, 2015," a report reads.

According to the information, the serviceman was buried in the town of Starobilsk, Lugansk region.

"Today, we’ve suffered one more loss, for a soldier from the second Afghan assault company, Yevgen Marchuk, 27, is dead," it says.

Terrorists attack with banned weapons in all directions;

a peaceful night reported on the outskirts of Mariupol

Popasna was shelled with self-propelled artillery weapons for almost an hour. A clash occurred near Leninske and Nelepovka at around midnight.

In the Lugansk direction, the town of Schastya was fired upon with a tank, grenade launchers, and mortars. Gunmen do not stop attacking Stanyzia Luganska, Krymske, Sokolnyky with ICVs, AA mounts, and machine-guns.

In the Mariupol direction, rebels shelled Shyrokine with self-propelled artillery weapons, mortars, and grenade launchers. Pavlopol was assaulted with machine-guns.

Film director from Russia becomes a citizen of Ukraine

A film director and participant of the film association "Babylon'13", and also a volunteer of the Kyivska Rus battalion, Kristian Zheregi, has become a citizen of Ukraine.

According to his words posted on Facebook, the relevant decree was inked by President Petro Poroshenko on April 23, 2015.

The film director had been a citizen of the RF, even though he had been living in Ukraine for several years.

When asking about granting him the Ukrainian citizenship, Zheregi explained “I do not want to die defending this country with the Russian passport in my pocket.

Kristian Zheregi has shot about 20 short films about events on the Maidan square and in the Crimea. The film "Zapovit" [Testament] won a prize at the festival "Vidkryta Nich" [Open Night].

causing the death of a woman and a serviceman

Inhabited settlements along the demarcation line in the government-held territory of the Lugansk region were intensively attacked with various types of weapons in the period between second half of Tuesday, May 26, and Wednesday morning, the head of the Lugansk Regional State Administration Gennady Moskal reported on his webpage on the morning of May 27.

A residential area in the town of Popasna was mortared on Wednesday at 4 am. One of shells hit a private house, killing its owner - a 55-year-old woman - who was hiding in the basement.

Russian naval ship and submarine reported near the Latvian border

A Russian warship and a submarine were observed near the Latvian border on Wednesday, the National Armed Forces of Latvia posted on Twitter.

As reported earlier, Russian naval ships and aircraft have been frequently spotted near the borders of the Baltic States since the beginning of the conflict in Ukraine.

Fierce battles raging between Krymske and Sokolnyky, no contact with the village

A number of skirmishes, which grew into fierce gun battles, were reported in the area between the government-held village of Krymske and the rebel-held village of Sokolnyky last night, the head of the Lugansk Regional State Administration Gennady Moskal reported on his webpage on the morning of May 27.

US congressmen: Russia burns its soldiers perished in Ukraine

Russia is so desperate to hide its military involvement in Ukraine that it has brought in mobile crematoriums to destroy the bodies of its war dead, say U.S. lawmakers who travelled to the war-torn country this spring.

The U.S. and NATO have long maintained that thousands of Russian troops are fighting alongside separatists inside eastern Ukraine, and that the Russian government is obscuring not only the presence but also the deaths of its soldiers there. In March, NATO Deputy Secretary General Alexander Vershbow told a conference, "Russian leaders are less and less able to conceal the fact that Russian soldiers are fighting -- and dying -- in large numbers in eastern Ukraine."

Hence the extreme measures to get rid of the evidence. “The Russians are trying to hide their casualties by taking mobile crematoriums with them,” House Armed Services Committee Chairman Mac Thornberry told me. “They are trying to hide not only from the world but from the Russian people their involvement.”

“We heard this from a variety of sources over there, enough that I was confident in the veracity of the information,” Moulton said, also being careful not to disclose classified U.S. intelligence.

Both Thornberry and Moulton agreed with Vershbow's assessment that Russian President Vladimir Putin was struggling to keep up the ruse that he has no soldiers fighting inside Ukraine. Moulton said the mounting evidence of dead Russian soldiers is causing a domestic backlash for Putin. Russian and Ukrainian bloggers and activists have been compiling lists of Russian soldiers killed in Ukraine, including details of their service and circumstances of their deaths. New organizations in Russia representing soldiers’ families have sprung up to publicly challenge Putin's narrative.

General Staff: 1 service member killed and 8 others wounded in the ATO area

1 military died, and 8 others were wounded in the area of the anti-terrorist operation in the past 24 hours, a spokesman for the Presidential Administration on ATO issues, Oleksandr Motuzyanyk, reported at a briefing.

Motuzyanyk said that the most difficult situation remained in the Donetsk direction.

He also added that a number of violent clashes occurred in the Mariupol direction, namely in the village of Shyrokine.

According to the ATO Headquarters, hostilities almost along the whole confrontation line from Zolote to Stanyzia Luganska were reсorded on Wednesday.

A freight train pictured carrying a convoy tanks towards the Ukrainian border looks to escalate tensions between the two sides even further.

The nine tanks arrived in the southern town of Matveyev Kurgan on Monday, before being driven along the streets on Tuesday.

The picture, taken on a mobile phone, comes just days after a huge convoy, including rocket launchers, military trucks without licence plates and armoured personnel carriers, was photographed driving along a road near the town.