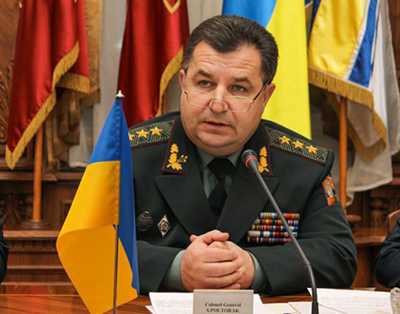 Poltorak: 42,5 thousands of Russian soldiers and rebels fighting in the ATO area

According to the Minister of Defence, approximately 42,500 Russian soldiers and insurgents are fighting in Donbass at present, with Russia being the main supporter of the armed conflict in the east of Ukraine.

He also added that Moscow continues to supply weapons and train rebel groups. It should be recalled that all foreign armed forces were to leave eastern Ukraine in accordance with the Minsk agreement.

"As of today, the total number of Russian armed forces and illegal armed units deployed to the occupied territories of the Donetsk and Lugansk regions accounts for app. 42,500 people," Poltorak said.

"They have 558 tanks, AVCs, MLRSs and other weapons. It would be enough for the average European country."

White House: US not to provide Ukraine with lethal weapons

The United States is not intending to supply offensive weapons to Kiev, as it would not contribute to solution of the crisis in the country, White House Press Secretary Joshua Earnest said. Earnest reminded that Washington had already provided Kiev with military assistance, reflecting the "depth of the US commitment to Ukraine." On May 15, US Congress passed a defence budget bill that will allocate $300 million in lethal defensive weapons for Ukraine government forces. US President Barack Obama has been reluctant to provide such assistance to Kiev. In March, Washington said it would redeploy up to 300 military instructors from Italy to Yavoriv, near the Polish border, as part of a mission to train the Ukrainian National Guard.

Boat blown up by rebel explosives near Mariupol

A Ukrainian coastguard boat was blown up on Sunday in the Azov Sea near Mariupol by a bomb made by pro-Russian rebels, the ATO press centre reported on Facebook on Monday.

The border guards thought the unidentified object found in the sea was a beacon and pulled it to the boat. The bomb went off immediately damaging the boat and injuring those on board, the press centre said.

As reported earlier, a similar device was recently washed ashore by the sea near the village of Vynogradne. A fisherman who found it and tried to take it apart got wounded. Both explosive devices had drifted from rebel-held territories of Donbass, the press service announced.

ATO Headquarters: The situation in the Artemivsk direction escalates

Mercenaries assaulted our positions near the settlements of Semyhirya and Pershe Travnia with 122-mm barrel artillery. Leninske was shelled with 120-mm mortars three times overnight in this sector.

Army positions near Opytne, Avdiyivka, the Butivka mine, in the Donetsk region and Shyrokine near Mariupol were shelled by rebels with 120-mm mortars.

10 rebel drones were reported over the ATO area overnight mainly in the Lugansk and Artemivsk directions.

Rebels fired 120-mm mortars near the village of Schastya, Lugansk region, Dmytro Tymchuk, the founder of the IRG posted.

In the Mariupol direction, militants carried out intense attacks with 120- and 82-mm mortars near Shyrokine and Pavlopol (high points to the west and north of Shyrokine).

Two groups of rebel snipers have been firing at forward positions of ATO forces near Shyrokine for several days in a row. They are very well trained shooters according to some reports.

Further attacks with infantry heavy armaments and military hardware were recorded near the settlement of Zolote and close to the Svitlodarsk foothold.

Rebels fired with small arms, mortars and barrel artillery near Pisky, Opytne, to the north of Avdiyivka, near Shumy and the Mayorska station.

Bombardments with 120-mm 2B16 Nona-K cannons were reported in the Artemivsk and Lugansk directions.

No losses in the ATO area in the past 24 hours

No Ukrainian soldier was killed in the ATO area in the past 24 hours, a spokesman for the Presidential Administration on ATO issues, Andriy Lysenko, reported at a briefing.

He also said that 10 service members had sustained different types of wounds.

"No one died, 10 people were wounded. One border guard went missing as a result of a boat bomb attack near Mariupol," he said.

Poroshenko: 112 policemen and 154 national guards died during the ATO

112 officers of the Ministry of the Interior and 154 servicemen of the National Guard have died since the beginning of the joint Antiterrorist Operation in Donbas, President Petro Poroshenko said during an awards ceremony held for ATO participants on Monday in Kyiv, "Interfax-Ukraine" reports. According to Poroshenko, a total of 20 thousand law enforcement officers have so far served in the ATO area since hostilities broke out.

"Today, 3275 police officers and National Guard servicemen continue to serve at the front and in the near-front zone of the ATO area," the president said.