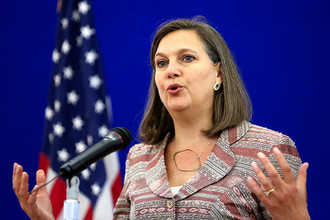 The U.S. president has still not decided whether to supply lethal weapons to the Ukrainian armed forces. The matter is under consideration, and the decision will depend on the situation in the conflict zone, U.S. Assistant Secretary of State Victoria Nuland said in an interview published by Gazeta.ru.

The most preferable option for the U.S. and the international community is the observance of the Minsk agreements, which includes the termination of fighting along the line of contact and the withdrawal of Russian military hardware, instructors, and support forces from Ukrainian territory, she said.

When asked whether the U.S. could speed up the peace process in Ukraine and whether it could join the Normandy format of negotiations for this purpose, Nuland replied that the matter had been addressed at Secretary of State John Kerry's meeting with Russian President Vladimir Putin in Sochi, when the two discussed how the U.S. could help accelerate the implementation of the Minsk agreements and how it could support Russia, Ukraine, and the OSCE's efforts in the trilateral discussions on settling the conflict.

However, it became clear at the meeting that Russia was not interested in the U.S. formally becoming a participant in the Normandy format, she said.

The situation in the ATO area remains complicated with almost 100 attacks on positions of Ukrainian troops and peaceful settlements in the past 24 hours, the ATO press-centre posted on Facebook.

Terrorists resorted to arms against government forces 40 times in the period between 6 PM yesterday and this morning.

They conducted attacks on Zolote and Komyshuvakha (near Artemivsk) with 120-mm mortars. In the Lugansk region, the village of Sokolnyky came under fire.

Maryinka was mainly attacked after midnight with 120-mm mortars and MLRSs.

Terrorists fired the same weapons on Ukrainian troops stationed near Stepove (once) and Novotoshkivske (twice).

They bombarded army positions near Opytne and Pisky with tanks.

The headquarters announced that the situation in and around Mariupol had been stable at night, other than rare assaults with machine-guns and grenade launchers.

Soldier killed in Krymske; the night attack resulted in the cut off of the power supply

The village of Krymske situated near the Bakhmutka highway was repeatedly assaulted from rebel positions in the occupied village of Sokolnyky on the Sunday of June 14, the governor of the Lugansk region, Gennady Moskal, reported on his website.

No resident quarters or civilians were hit, but a 36-year-old serviceman sustained serious shrapnel wounds as a result of rebel attacks conducted after 1PM Sunday. He died several hours later.

The last mortar attack on Krymske was carried out at 3 AM, June 15.

Shells damaged a 35-kilovolt power line, so part of the village was cut off of the electricity.

IRG: Militants intensify their activity and try to penetrate into forward positions of ATO forces

Rebels intensified their activity in Donbass at the weekend, June 13 and 14, and carried out attacks on Ukrainian troops and inhabited settlements with heavy armaments.

In a number of directions, rebel infantry forces attempted to advance to forward positions of ATO forces, but Ukrainian service members repelled all attempts, as reported by the founder of the IRG, Dmytro Tymchuk, on Facebook.

The settlements of Opytne, Vodyane, Pisky, Krasnogorivka, Maryinka, and Avdiyivka were shelled with 120-mm mortars and 122-mm artillery in the past 24 hours (virtually during the whole day and night).

Russian and terrorist units stationed in Maryinka and Krasnogorivka were significantly reinforced.

In the Artemivsk direction (near the settlements of Zolote, Popasna, Novozvanivka) insurgents bombarded army positions with AHS-17 grenade launchers, 120-mm and 82-mm mortars. Attacks were mainly focused on forward edges of ATO troops and sometimes on Ukrainian strongholds.

A rebel unit of 450 to 500 people divided in several groups was moved to Gorlovka through Yasynuvata and Yenakiyevo, the founder of the Information Resistance Group, Dmytro Tymchuk, posted on Facebook on the morning of June 15.

At the same time, according to IRG, rebel artillery was also repositioned there: 6 2S1 Gvozdika SP artillery units and 5 D-30 canons were reported moving to the area.

Two TOR-M1 AA missile systems were relocated via Shakhtarsk. The column was accompanied by two 80 APCs and 3 KAMAZ trucks.

Three Strila 10M AA missile systems were spotted on the move in an area between Sodove and Khartsyzk.

Rebel units were redeployed in small groups from Alchevsk to Debaltseve (5 to 6 trucks with at least 550 people on board).

A military column (4 APCs and 4 2S3 SP artillery units) was observed moving in the direction of the Isakivskiy Lake via Alchevsk.

ATO Headquarters: 2 killed, and 20 wounded within the past 24 hours

2 military died, and 20 others were wounded in the area of the anti-terrorist operation in the past 24 hours, a spokesman for the Ukrainian National Security and Defence Council, Andriy Lysenko, reported at a briefing on Monday.

According to him, a negative trend to expansion of fighting geography is still dominating the ATO area.

The ATO spokesman also added that according to the preliminary information, rebels carried out over 80 attacks in the past 24 hours.

25 enemy UAVs were recorded over the ATO area.