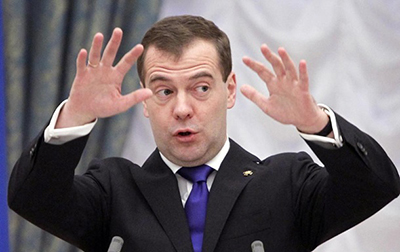 Russian Prime Minister Dmitry Medvedev defined the IMF loans granted to Ukraine as “a large-scale theft,” according to his posts on Facebook on Monday.

He produced comments amid Ukrainian President Petro Poroshenko’s claims that the Russian Federation bribed Viktor Yanukovych’s regime in exchange for his refusal to sign the Association Agreement.

"If the $3 billion sovereign loan received from Russia is a bribe according to Poroshenko, then the billions negotiated with the IMF is an arrangement of a large-scale theft", a statement reads.

As reported earlier, Ukrainian President Petro Poroshenko said in an interview with Bloomberg Television on Monday that Russia’s $3-billion-dollar loan granted to his country was a "bribe to secure a deal" with at that time Ukrainian President Yanukovych.

Over a period of two days, the SMM at the Joint Centre for Control and Co-ordination (JCCC) observation point at Donetsk central railway station (“DPR”-controlled, 8km north-west of Donetsk city centre) observed a total of at least 594 explosions caused by incoming and outgoing artillery and mortar fire, as well as small arms and light weapons (SALW), including heavy machine-gun fire. The SMM concluded that the explosions occurred at locations to the north, north-west, north-east, west, and south-west and at distances ranging between 2 and 10km from its position.

Rebels carried out app. 30 attacks on army positions and peaceful inhabited settlement in the antiterrorist operation area on the night of June 16, the ATO press centre reports.

In the Artemivsk area, the enemy mortared Troitske and Novhorodske three times in the past 24 hours.

In the Lugansk region, the village of Krymske came under fire with weapons banned by the Minsk agreement. Stanyzia Luganska and Schastya were attacked with machine-guns.

Shyrokine was bombarded seven times by rebels with 120-mm mortars.

According to reports, Illegal paramilitaries shelled Shyrokine and Zolote, Lugansk region, and Horikhove near Artemivsk with large calibre artillery systems and mortars after midnight.

An enemy sniper worked in Maryinka.

A number of inhabited settlements came under rebel fire, and several clashes between Ukrainian troops and rebel commandos were reported in some areas, he posted on his webpage.

Fighting between Ukrainian soldiers and sabotage and reconnaissance groups, which crossed into the government-held territory from the right bank of the Siversky Donets occurred near the village of Kryakivka.

Two Ukrainian soldiers were killed, and two others wounded badly as a result of the battle. They are in hospital now.

IRG: Around 50 Russian military and army equipment observed near Donetsk

A division of Russian servicemen camouflaged as local separatists was observed near the settlement of Ryasne, Donetsk region, the founder of the Information Resistance Group, Dmytro Tymchuk, posted on Facebook.

"A division of Russian soldiers (around 50 people) camouflaged as local "insurgents" was spotted near the settlement of Obopilne together with 6 80-APCs and two "Mustang" KAMAZ trucks," he said.

According to him, Russian servicemen were armed with 4 VSS Vintorez suppressed sniper rifles (a Russian silent sniper rifle designed for special task forces).

2 service members were killed and 5 others sustained wounds in the ATO area in the past 24 hours, a spokesman for the Ukrainian National Security and Defence Council, Andriy Lysenko, reported at a briefing on Tuesday.

According to him, 13 rebel UAVs were spotted on Monday conducting air reconnaissance over the ATO area.