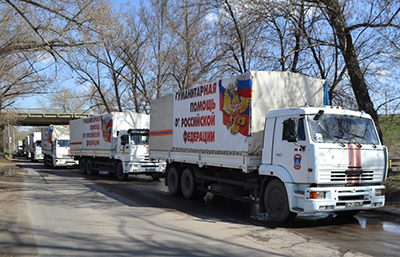 Russia’s emergencies ministry has send yet another, thirtieth, humanitarian convoy to Donbass, a ministry spokesman told TASS on Thursday.

"A convoy of trucks set off from the emergencies ministry’s Don rescue centre at 04:00 a.m. Moscow time. Before the border, the convoy will break in two to deliver about the same amount of cargoes to Donetsk and Lugansk. Both convoys will pass through all necessary border crossing procedures," the spokesman said.

The convoy is comprised of more than 100 trucks carrying more than 1,000 tonnes of humanitarian cargoes, mostly foods, articles of daily necessity and about 60 tonnes of medicines.

Since mid-August 2014, Russia’s emergencies ministry has reportedly delivered more than 37,000 tonnes of “humanitarian aid” to Donbass.

As reported earlier, Ukraine protests against Russian alleged "humanitarian convoys" crossing into its territory, but has no control over a segment of the Russia-Ukraine border; and Russians tend to deliver aid for separatists exactly through that segment.

Soros: EU treats Ukraine as yet another Greece, and this is wrong

EU leaders treat Ukraine as yet another Greece, and this is wrong, a famous American billionaire and philanthropist, George Soros, believes according to his article published in Project Syndicate.

Unfortunately, Europe’s leaders treat Ukraine as another Greece: a country in financial difficulties – and one that is not even a European Union member state, he said.

This is a mistake. Ukraine is undergoing a revolutionary transformation, and the current government is probably the one best able to deliver radical change.

There are indeed some significant similarities between the “old Ukraine” and Greece: both suffer from a corrupt bureaucracy and an economy dominated by oligarchs. But the new Ukraine is determined to be different. By keeping Ukraine on a short financial leash, Europe is jeopardizing the country’s progress.

In a sense, Europe’s failure to recognize the birth of a new Ukraine is not surprising. Spontaneous uprisings occur frequently; the Arab Spring, for example, spread like a wave across North Africa and the Middle East.

If Ukraine fails, the EU would have to defend itself. The cost, in financial and human terms, would be far greater than the cost of helping Ukraine. That is why, rather than drip-feeding Ukraine, the EU and its member states should treat assistance to Ukraine as defence expenditure. Framed this way, the amounts currently being spent shrink into insignificance.

The strategy for Ukraine that I proposed at the start of the year has run into three roadblocks. First, the debt restructuring that was supposed to account for $15.3 billion of the $41 billion contained in the second IMF-led rescue package has made little progress. Second, the EU has not even started to construct a new MFA framework agreement. And, third, EU leaders have shown no sign that they are willing to do “whatever it takes” to help Ukraine, Soros added.

“… The “new” Ukraine has repeatedly surprised everyone by its resilience; it may surprise us again. But Ukraine’s allies – particularly the EU – can do better. By revising their policies, they can ensure that the new Ukraine will succeed”, he resumed.

The European Union External Action has again called on Russia to release the former Ukrainian female pilot Nadezhda Savchenko suspected of involvement in the killing of Russian reporters near the city of Luhansk (in eastern Ukraine), the spokesperson for the EU foreign policy chief Federica Mogherini said in a statement issued on Wednesday.

Maja Kocijancic said in her statement that Savchenko had spent 365 days of detention, most of them in Russia, which "have severely affected her health."

"The European Union firmly calls for her release. This would be in keeping with the ‘Package of measures for the implementation of the Minsk agreements’ and the commitment to release all hostages and detained persons related to the conflict in Ukraine," the statement says.

Among enemy forces attacking Maryinka, there are mercenaries and Russian servicemen, namely Chechen fighters and CIA commandos, an advisor to the Minister of Internal Affairs, Zorian Shkiriak, reports on Facebook.

According to the report, terrorists went on the offensive at 11.40 PM on June 17. They fired heavy guns, SP artillery, tanks, "Rapiras", "Gvozdikas", and 120-mm mortars with cargo mortar bombs. Subdivisions of the 28th, 20th, and 93rd brigades of the Armed Forces of Ukraine, as well as fighters of the National Guard and the Ministry of Internal Affairs contained and repelled the attacks. The enemy incurs personnel and materiel losses.

Khodorkovskiy: Putin could resort to freezing the Ukrainian conflict

It is not advantageous to Vladimir Putin, having initiated a conflict in Ukraine, to curtail it or expand it. A frozen conflict may be a solution to the problem, an acclaimed Russian oppositionist, Mikhail Khodorkovskiy, said during a speech at the Atlantic Council in Washington on Wednesday, as reported by Ukrinform.

The situation in the ATO area was difficult, but remained under control of Ukrainian law enforcement units; rebels carried out almost 80 attacks on army positions and made three attempts to breach the defensive line, the ATO press-centre reports.

"Russian mercenaries and terrorists made three attempts to breach the defensive line in Maryinka yesterday, June 17. Our units successfully repulsed all attacks", a report reads.

In general, rebels carried out 79 attacks on positions of Ukrainian troops along the whole demarcation line with every weapon available. "In particular, they committed to action the artillery banned by the Minsk agreement, such as 120-, 122-, and 152-mm heavy armaments, as well as Grad MLRSs".

The last night in the ATO area was also difficult, for insurgents conducted 35 attacks on army positions.

Minister of Foreign Affairs of Latvia: Situation in Donbass may get out of control

The tension in Donbass is increasing, and the Minsk agreement can be violated at any time, Minister of Foreign Affairs of Latvia Edgar Rinkevics said, as reported by Reuters.

Rinkevics told Reuters that Moscow's nuclear rhetoric demonstrated the need for more NATO troops and equipment in the region, and that the military alliance must "be prepared for all kinds of contingencies."

"It shows that we have to be really prepared to respond as NATO to such kinds of threats through more troops, more military equipment in the Baltic States, in Poland," he said.

On Wednesday, EU governments agreed to extend economic sanctions on Russia until Jan. 31, maintaining Western unity despite the reservations that some EU members openly expressed.

Rinkevics said that violations of the peace deal had forced the extension of sanctions, and warned that escalating tensions there risked spiralling out of control.

"We cannot say that the Minsk agreement is totally broken, but what we have seen recently is that the level of tension is increasing," Rinkevics said.

"We are in a situation where the Minsk agreement can be broken anytime and in that case we are going to see a totally different situation, which is not going to be better."

IRG: The situation in Maryinka increasingly resembles the situation at the Donetsk airport

The number of rebels' attempts to launch an offensive in Donbas is increasing, as they tried to breach the defensive line of Ukrainian troops five times in the period between the evening of June 16 and the morning of June 18.

During this time, rebels carried out saturation attacks on ATO positions, the coordinator of the Information Resistance Group, Dmytro Tymchuk, posted on Facebook.

"At the moment, the situation in this area increasingly resembles the situation at the Donetsk airport (DAP) in the winter of 2014/2015," Tymchuk said.

Moreover, intense rebel activities were reported in the Artemivsk direction.

Gunmen committed 122-mm artillery and 120-mm mortars in sectors to the south of Donetsk (near Granite and Starognativka).

Army positions near Toshkivka, Novotoshkivka, Krymske and Tryokhizbenka were bombarded with SPG-9 and AGS-17 grenade launchers, as well as with 152-mm artillery.

General Staff: 3 service members killed and 14 others wounded in the ATO area

3 military died, and 14 others were wounded in the area of the anti-terrorist operation in the past 24 hours, a spokesman for the Presidential Administration on ATO issues, Andriy Lysenko, reported at a briefing on Thursday.